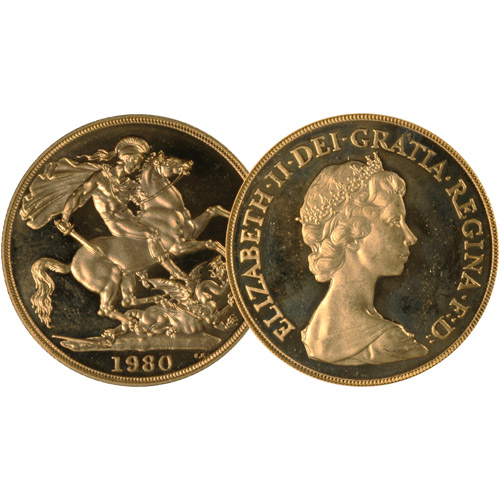 Any quantity available for $45.99 per coin over spot!

The English sovereign was one of the first internationally popular gold coins from the Royal Mint of England. Introduced in 1489 by King Henry VII, the English sovereign featured the monarch on the obverse and the Royal coat of arms on the reverse. The modern Gold Sovereign from Great Britain was introduced in 1817 and depicts the monarch on one side with St. George on the other. Today, Gold Great Britain Double Sovereign Coins are available to purchase online at Silver.com.

England’s Royal Mint originally issued a coin known as the English sovereign from 1489 until 1603. These gold coins were intended for circulation and remained available through the reign of King James I who united the crowns of England and Scotland under his rule. The reign of King George III included the reintroduction of the coin as the Gold Sovereign.

All Gold Great Britain Double Sovereign Coins in this listing come with a protective plastic flips. The first modern Gold Sovereign returned in 1817 with a Double Sovereign first struck in 1820. That coin was not released into circulation. It wasn’t until 1887 that the Double Sovereign was regularly struck. If you purchase a coin in this listing, please keep in mind it will be chosen at random once your payment is processed. If you buy multiples, you may receive several with matching date marks and designs.

On the obverse of Gold Great Britain Double Sovereign, you will find an effigy of the monarch whose reign matches the date mark. Queen Victoria and Queen Elizabeth II are the most common monarchs you will find on these coins because of their respective long reigns as Queen of England. Other possible Double Sovereign monarch designs include King George VI, King George V, and King Edward VII.

Please feel free to reach out to Silver.com with your questions about gold for sale. You can call us at 888-989-7223, chat with us online, or email us directly.