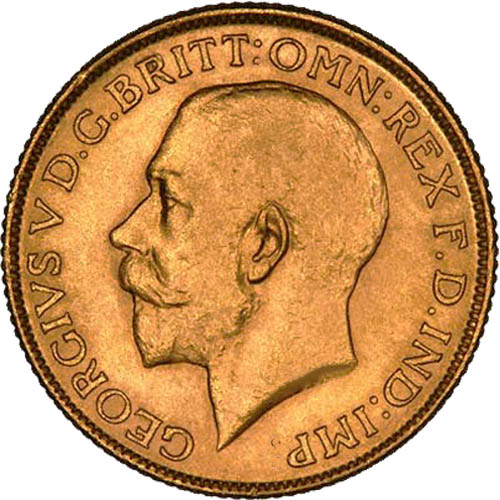 During the 20th century, a father-son duo of English monarchs held the throne as King of England using the royal name of George. King George V reigned from 1910 until 1936 and King George VI reigned from 1936 until 1952. Both men feature on gold sovereign coins still available to collectors today. Right now, Great Britain Gold Sovereign Coins are available to purchase online at Silver.com.

Each Great Britain Gold Sovereign coin issued here is sealed inside of protective plastic. The coins here have date marks that include 1911 to 1936 for King George V and 1937 to 1952 for King George VI.

The father-son duo of George V and George VI was an unlikely outcome in the British line of succession. George V was the son of King Edward VII and grandson of Queen Victoria I. He rose to the throne on 6 May 1910 following his father’s death and would see gold sovereigns struck with his likeness from 1911 until his own death.

On the obverse of Gold Sovereigns issued from 1911 to 1936 is the portrait of King George V. A left-profile bust was common in this era of British coinage, and George V was featured with his oversized mustache and full beard on this face of the coin. The more common design is the one in use from 1911 to 1925, with a latter portrait available from 1926 to 1936.

The death of King George V initially resulted in his eldest son Edward VIII becoming King of England in January 1936. However, Edward VIII abdicated the throne to marry American socialite Wallis Simpsons, and his younger brother George VI ascended to the throne. George VI was the father of Queen Elizabeth II and reigned as King of England from December 1936 until his death in February 1952.

On the obverse of Great Britain Gold Sovereigns issued from 1937 until 1952 is the left-profile bust of King George VI. His reign, like his fathers, saw him guide the kingdom through a World War. The stress of World War II and his penchant for smoking took a toll on his health and he died at the young age of 56.

The reverse of Great Britain Gold Sovereigns includes the Benedetto Pistrucci design of St. George. Created in 1817, this image has featured on the reverse of most gold sovereigns from that date with the exception of certain periods during the reign of Queen Victoria I.

If you have any questions about buying gold, please contact Silver.com. Our customer service team is available at 888-989-7223, online using our live chat, and via our email address.