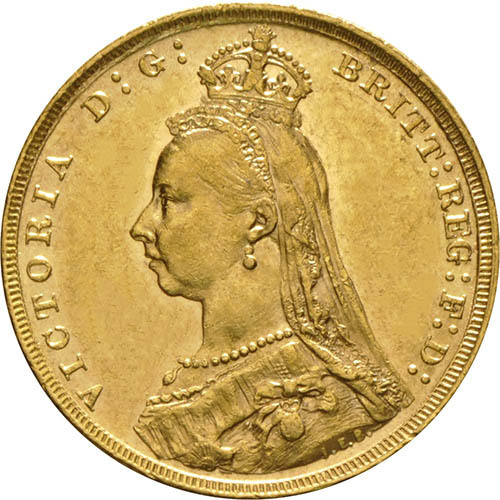 One of the most common gold sovereign coin designs from the 19th century in Britain is that of Queen Victoria I. Once the longest-reigning monarch in the country’s history, Victoria I appeared on Great Britain Gold Sovereign Coins from 1838 until her death in 1901. One of the more unique issues during this era is known as the Jubilee Sovereign. Right now, Great Britain Gold Sovereigns from Victoria’s Jubilee issue are available to you online at Silver.com.

Each Great Britain Gold Sovereign coin available to you here today comes inside of protective plastic. Known as Jubilee Sovereigns, these coins were issued by the Royal Mint only between 1887 and 1893 as part of the Golden Jubilee celebration of Queen Victoria I of England. The design of her bust was one taken from a statue created in honor of her 50th anniversary on the throne of England.

Queen Victoria I’s Golden Jubilee marked 50 years on the throne and was held on 20 June 1887 as a singular party. However, countless commemorative statues, busts, and coins were issued with a so-called Jubilee design. All of these designs used the official bust of Queen Victoria created by artist Francis John Williamson as inspiration.

On the obverse of the Great Britain Gold Sovereign Coin from Victoria’s Jubilee era is the left-profile portrait of the Queen. Also based upon the Williamson carving, it features inscriptions in Latin that translate into English as her name “Victoria” and the common British sovereign phrase of “By Grace of God, Queen of England.”

The reverse side of all Great Britain Gold Sovereign Coins issued since 1817 have the image of St. George. Benedetto Pistrucci was the original designer of both the obverse and reverse sides of the gold sovereigns in 1817 and his St. George depiction captures the Christian saint on horseback as he slays a dragon.

All Great Britain Gold Sovereign Coins are struck by the Royal Mint. From this era, the coins were issued by varying mint facilities, but the modern Royal Mint relies upon a singular coining facility in southern Wales.

If you have any questions, please don’t hesitate to contact Silver.com. You can reach our customer service team on the phone at 888-989-7223, chat with us live online using our dedicated service, or simply send us an email. Don’t forget to check today’s gold price while you shop!