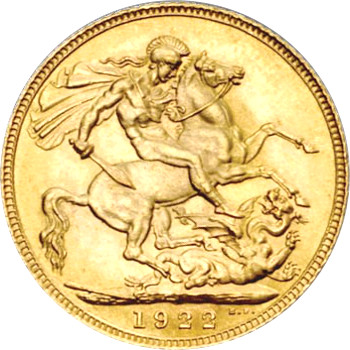 The Great Britain Gold Sovereign is one of the oldest and most highly regarded coins in the world today. Designs still in use on the gold sovereign today have been with the coin series since the 19th century, with updates conducted only on the image of the sovereign on the obverse side of the coin. Today, you can own a Great Britain Gold Sovereign from the year of our choice in varied condition.

Gold sovereigns are 22k gold coins from the United Kingdom with a nominal value of one pound sterling. The original English gold sovereign was last minted in 1604, and the modern gold sovereign was restarted with the Great Recoinage of 1816. This measure established weights and purity levels for gold sovereigns, establishing the coin as a centerpiece of English currency.

The sovereigns have been minted from 1817 to 1917 in the UK, again in 1925, and again since 1957. The coin was once standard circulation currency when Britain was on the Gold Standard prior to 1932.

The design on the reverse side of the Great Britain Gold Sovereign has remained largely the same since 1817. The original image was a shield and crown motif that included a heraldic wreath. However, a subsequent image was chosen which portrays Saint George killing a dragon. This image was designed and engraved by Benedetto Pistrucci. His design remains in use on the reverse side today.

On the obverse side, the image has changed over nearly 200 years of history based upon the sitting monarch of England. Throughout the reigns of King William IV, Queen Victoria, King George IV, and Queen Elizabeth II, those individual monarchs have had their image used on the obverse side.

If you have questions about the Great Britain Gold Sovereign Coins available from Silver.com, please contact our associates directly at 888-989-7223. You can also us the live web chat function on our website to learn more about our coins and the purchasing process.