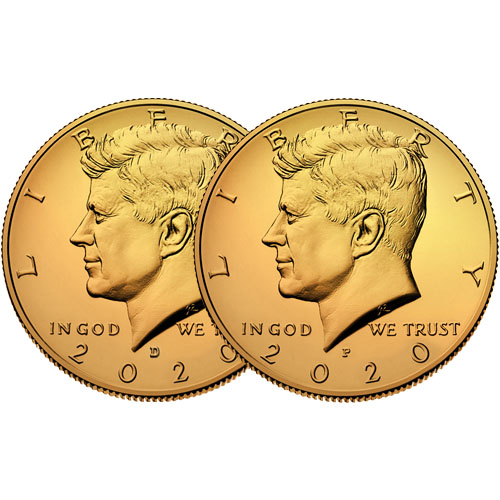 Introduced in 1964, the Kennedy Half Dollar circulation coin design was one of the quickest developed and deployed by the United States Mint. It also ended one of the shortest runs of production for a US coin design in replacing the Benjamin Franklin Half Dollar coin after just 17 years in production at the mint. While the Kennedy Half Dollar remains in production today, it is no longer a silver coin as it once was. However, there are beautiful versions of this legal tender coin that have collectible value and precious metal worth. Today, JFK Gold-Plated Half Dollars are available to you online at Silver.com.

The Kennedy Half Dollar coin has the distinction of featuring designs from two men who held the post of Chief Engraver of the United States Mint. The image of President Kennedy featured on the obverse side of the coins was created by Gilroy Roberts. Roberts served as the 9th Chief Engraver of the US Mint for nearly two decades from 1948 until his death in 1964, making this bust of Kennedy one of his final contributions to American coinage. He was succeeded by his top Assistant Engraver, Frank Gasparro. The designer of the reverse Kennedy Half Dollar design, Mr. Gasparro was the 10th Chief Engraver of the United and held the position from 1965 to 1981.

All of the JKF Gold-Plated Half Dollars available through this product listing come to you with individual capsules and a small, round display stands that enables you to stand the coin in its capsule upright. These coins also come with a Certificate of Authenticity. Each one of the coins is more than just a legal tender US coin with cupro-nickel composition. These coins have a stunning layer of 24-karat gold applied to both the obverse and reverse design fields for enhanced visual brilliance. In this two-coin set of US Half Dollars, you receive one coin with a Denver Mint “D” mark and one with a Philadelphia Mint “P” mark.

President John F. Kennedy is captured in left-profile relief on the obverse side of these JKF Gold-Plated Half Dollars. As mentioned above, Gilroy Roberts developed this design. However, it was a mere modification from a 1962 medal design he had created earlier in JFK’s administration.

A modified version of the Presidential Seal of the United States is found in the reverse design of JFK Gold-Plated Half Dollars. The image found here was created by Frank Gasparro, as alluded to earlier, and was likewise a modification from a previous medal design. It is similar to the heraldic eagle of the US and features the bald eagle with the US national shield, the arrows of war, and the olive branch of peace.

Please contact Silver.com with any questions. You can call us on the phone at 888-989-7223, chat with us live online, or simply send us an email.