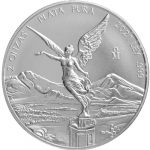 The Mexican Mint doesn’t have the global profile of its neighbors to the north, but it does hold the distinction of being the oldest operating facility in the Western Hemisphere. Founded in 1535 by Spanish conquistadors, the Mexican Mint has served as the official refinery and mint of governments in Mexico for almost 500 years now. You can learn all about the Mexican Mint in the following Silver.com profile.

Background Info on the Mexican Mint

It is impossible to understand the reputation of the Mexican Mint, known in Mexico as La Casa de Moneda de Mexico, without looking into the history of the mint system itself. When Spain completed its conquest of the Aztec Empire in 1521, the Spanish crown set about the task of establishing a colonial empire in the Western Hemisphere. One of the first orders of business, establishing the first mint in the Americas to process the gold and silver found throughout the region.

The modern Mexican Mint is located in Mexico City, the national capital of Mexico. In 1535, Viceroy Antonio de Mendoza arrived in what was then called New Spain to assume control of the territory of New Spain from the capital of Mexico City. The colony of New Spain not only included all of Mexico and most of Central America, but also Cuba, Haiti, the Dominican Republic, Puerto Rico, Jamaica, the Cayman Islands, Trinidad, the Bay Islands, and the Philippine Island.

Originally, the Mexican Mint produced coinage that was used throughout the territories of New Spain, and its products were not only used in other regions of North and South America, but even served as the basis of future monetary programs such as the U.S. dollar, Japanese Yen, and Chinese Yuan. Since 1925, Banco de Mexico (the nation’s central bank) has controlled the minting of coins and printing of banknotes handled by the Mexican Mint.

The Mexican Mint has one primary bullion coin program it strikes on an annual basis, the Mexican Libertad. Available in gold and silver, with bullion, proof, and uncirculated versions of the coin available, it is an increasingly popular option among investors.

Inspiration for the Libertad

Although many of the coins produced at the Mexican Mint during its first 300 years of operation were well known throughout the Western Hemisphere, modern investors and collectors first took notice of the Mexican Mint as a result of the gold Centenario coin. The Centenario coin was a gold bullion product struck by the Mexican Mint for the first time in 1921 to commemorate the nation’s 100th anniversary of independence from Spain.

Gold Centenario coins are still available today, though many of the coins are reproductions struck after 1947. Original Centenario coins were produced with 1.2 oz of .900 pure gold. Although they had no monetary value as a circulation coin, each one was issued a face value of 50 Pesos by Banco de Mexico.

Production of the coins was rather robust throughout the minting history. The first year was the lowest mintage year except for 1943. The Centenario was produced from 1921 to 1931, and again from 1943 to 1947. The program went back into production from 1949 to 1972, but all of these Centenarios were struck with a 1947 date mark.

All Gold Centenario coins from the Mexican Mint shared the same design set throughout its production life. On the obverse side, the image of Winged Victory (also known as the Angel of Independence) was featured in the middle. Struck in front-facing relief, the full figure of Winged Victory was representative of the nation’s freedom. The crown wreath in her right hand symbolized the freedom to rule, while the broken chains in her left hand represented freedom from Spanish oppression.

A face value of 50 Pesos was engraved on this side, along with the coin’s weight, purity, and metal content. Along the bottom, an engraving of 1821 symbolized the year of independence, while a date next to that indicated the year of striking.

On the reverse side of the coin, the Mexican coat of arms was featured in the middle of the image. The nation’s official seal features a golden eagle on its perch atop a cactus, with a serpent clutched in its talons and beak.

Production continued for four years this time, with 1 oz coin strikes produced to meet demand, and strict limits set on the fractional weight coins in three of the four years. Yet another halt to production occurred from 1995 to 2000. The coins were again struck in 2000, but just a total of 15,530 coins were minted across the five weights.

In addition to this bullion coin, the Mexican Mint produces a Mexican Gold Libertad in a proof version. The first Proof Gold Mexican Libertad Coin was struck in 1989, but was only available in a ½ oz size with a limited mintage of 704. The modern Proof Gold Mexican Libertad was introduced in a ¼ oz weight in 2004, and in a full range of five weights (1 oz, ½ oz, ¼ oz, 1/10 oz, and 1/20 oz) in 2005.

As a result of its introduction following the revisions in 2000, Proof Gold Mexican Libertad Coins are only available with the modern designs on both the obverse and reverse sides of the coin. The Mexican Mint has produced the Proof Gold Libertad every year since 2005, with the exception of 2012. Banco de Mexico issues tight restrictions on the total number of coins produced each year. The highest production year to date for Proof Gold Mexican Libertads came in 2011, which marked the first time that more than 1,000 coins were struck in each of the five weights. Production in 2014 marked an all-time low, with just 1,350 coins in total across all five weights.

The Brilliant Uncirculated version of the Silver Mexican Libertad has been the most consistent and diverse version of the coin available to investors and collectors. Originally introduced in 1982, these coins were struck only in a 1 oz version at first with much higher mintage volumes that currently produced by the Mexican Mint. The 1 oz version of the coin is subject to the demands of the public, with the mint working to strike the coins to match demand. As such, there have been massive fluctuations in the coin’s production.

Recent years have seen the 1 oz BU Silver Mexican Libertad coins struck at higher levels, jumping as high as 1.65 million during the height of the Great Recession in 2009. The mintage history of the fractional-weight and full-weight coins has been much different though.

Introduced in 1991, the fractional-weight coins from the Mexican Mint include a 1/20 oz, 1/10 oz, ¼ oz, and ½ oz coin. The coins were first introduced with the same mintage range, all of them around 50,000 in total. Over the course of time as certain weights have proven more popular, mintage levels have changed. For example, in 1992 there were 295,783 1/20 oz BU Silver Mexican Libertads struck compared to just 104,000 of the ¼ oz coins.

The BU Silver Mexican Libertad program increased again in 1996 with the addition of a 2 oz and 5 oz variety. These coins originally had set mintages each year, though that has changed in recent years. Compared to other versions of the coin, production of these larger weights is much lower. As of 2015 though, mintage levels for these coins jumped equal to or higher than the fractional weights. For example, the 2015 2 oz BU Silver Mexican Libertad had a mintage of 20,100 compared to 19,900 1/10 oz coins, the highest among the fractional weights.

While the official bullion coin in the series was introduced in 1982 and struck steadily over the course of the next three decades, the proof version of the Silver Mexican Libertad has a choppier mintage history. The proof version of the coin was not introduced until 1983, and like the brilliant uncirculated bullion coins it was only available in a 1 oz weight at first.

However, while the 1 oz. coin had high mintage levels consistently, the proof coin debuted with just 998 coins struck. In 1984 and 1985, there was no Proof Silver Mexican Libertad coin struck by the Mexican Mint. The program resumed in 1986 with extremely limited mintages. Proofs returned with a mintage of 30,006, but in five of the next six years there were just 10,000 coins struck annually, with the lone exception being 1987 when 12,000 proofs were produced.

Throughout the 1990s, demand for silver was low amid prosperous global markets. Mintage continued to decline throughout the 90s. In the midst of this decline, the Mexican Mint released the 2 oz and 5 oz Proof Silver Mexican Libertad coins in 1996, with mintage set for the first year at 1,200 coins in each weight.

Mintage of the Proof Silver Mexican Libertad coins bottomed out in 1999 with just 600 coins struck for the 1 oz. and each of the four fractional-weight coins, as well as 280 2 oz coins and just 100 5 oz coins. Despite the rising demand for silver, 2012 was an odd year for the program as only the 1 oz Proof Silver Mexican Libertad was produced with a mintage of 4,200 coins. This was likely the result of a global rush on silver and prioritization by the Mexican Mint, as more than 3 million 1 oz brilliant uncirculated coins alone were struck in the three years leading up to 2012.

Silver.com is proud to carry all versions of the Gold Libertad and Silver Libertad in our online catalog. If you have questions about the Mexican Mint, its official silver and gold coins, or our purchasing processes, please don’t hesitate to ask. You can reach a Silver.com associate on the phone at 888-989-7223, connect with us online using our live web chat, or submit your questions in writing via email.