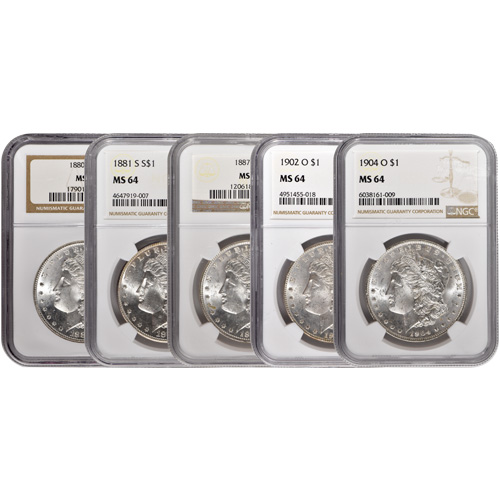 The Silver Morgan Dollar was last issued over a century ago by the United States Mint, with most of the coins struck in the 19th century during its original production run from 1878 to 1904. The coins were struck during this timeframe by a total of four branch mints of the US Mint and remain one of the most popular silver coins among collectors today. Right now, Silver Morgan Dollar 5-Coin Sets in certified condition are available to purchase online at Silver.com.

Each Silver Morgan Dollar 5-Coin Set offered here at Silver.com comes with coins individually packaged in plastic slabs by the NGC. Each coin has a Mint State 64 certification, indicating the coins have average mint luster for the date with light, scattered contact marks that include the potential for some of those marks in the primary focal areas. There may also be a few hairlines throughout the coin’s surface or a small patch of hairlines.

These Silver Morgan Dollar 5-Coin Sets from Silver.com cover only the 1878 to 1904 date range. None of the 1921 coins are available in this set. However, you will receive five coins that each have different date marks in the 1878-1904 range.

Morgan Dollars were struck by two mints for the entirety of the 1878-1904 range, with two other mints contributing. The Philadelphia Mint and San Francisco Mint struck the coins each year. The New Orleans Mint missed out on only the debut year in 1878, striking coins from 1879 to 1904. The Carson City Mint struck the coins in two spurts. The first was 1878 to 1885, while the second was 1889 to 1893.

The obverse of Silver Morgan Dollars in the five-coin set includes the portrait of Lady Liberty. Anna Willess Williams sat through four portrait sessions with George T. Morgan to serve as the inspiration for his left-profile portrait of Liberty for the series.

On the reverse of the coins in the Silver Morgan Dollar 5-Coin Set is the heraldic eagle of the United States of America. This design was also created by George T. Morgan and features the bald eagle in front-facing relief with the arrows of war and the olive branch of peace in its talons.

If you have any questions, Silver.com is here to help. Our team can assist you at 888-989-7223, chat with you live online, or respond in writing via our email address.