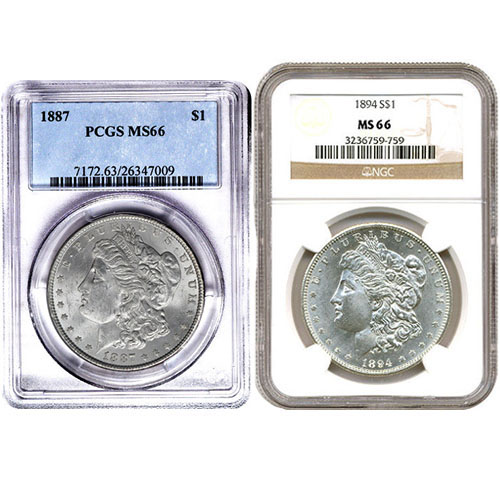 Ships to you sealed in a protective plastic slab by the NGC or PCGS!

Prior to the initial release of the Morgan Silver Dollar in 1878, the United States had issued silver dollars using a free coining system. American citizens could submit silver to the United States Mint to be struck into silver coinage with no cost incurred by the individuals. The Bland-Allison Act of 1873 brought an end to this practice, and by default, an end to the coining of silver dollars in the US.

When the silver dollar returned in 1878, there was no free coining of silver through the US Mint. A set amount of silver was to be obtained by the US Mint through purchase to produce silver coins for circulation within the economy. The Morgan Silver Dollar was the first of these coins to debut from the mint.

In this Silver.com listing, the Morgan Silver Dollar is available to you in Mint State 66 condition as adjudged by either the NGC or PCGS. A coin with an MS66 grade has above average quality of its surface and mint luster, with no more than three to four minor/noticeable contact marks. A few slight hairlines may show under magnification, and you may also find two light scuff marks.

Silver.com cannot guarantee you the year of issue on your coin, or the specific certification house. All Morgan Silver Dollars for sale here are guaranteed to be in MS66 condition as graded by the PCGS or NGC, but the specific certification house and year of issue are determined by availability in our warehouse at the time your order is fulfilled for shipment. Coins come from the original 1878 to 1904 issue of the Morgan Silver Dollar, and include none of the 1921 strikes.

The obverse of all Morgan Silver Dollar Coins features the left-profile portrait of Liberty, based upon Anna Willess Williams. Included on this face are the word “Liberty” and the year of issue. Flip the coin over to its reverse and you’ll find the American bald eagle with arrows in one talon and an olive branch in the other.

Please don’t hesitate to reach out to Silver.com with questions. We’re available at 888-989-7223, online using our live chat, and via our email address.