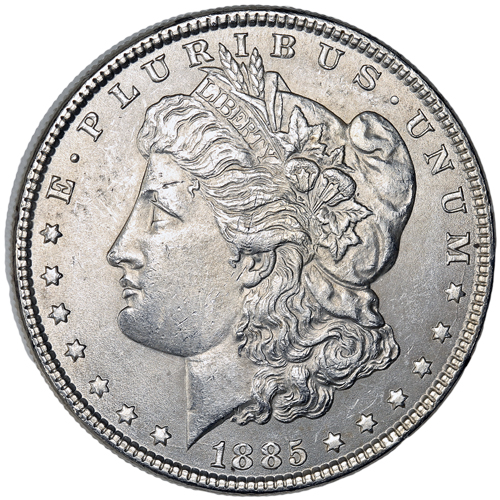 All Morgan Silver Dollar coins available here today on Silver.com in this listing are in BU condition. Coins in this condition exhibit no signs of wear and tear, though you may notice a range of minor flaws that include breaks in the luster, spotted surfaces, and contact marks from the original coining process.

As noted above, the original production run of 570 million Morgan Silver Dollars over nearly 30 years was actually a bit of an exercise in futility. At the turn of the 20th century, Americans had little interest in carrying around bulky silver dollar coins. Of the 570 million struck, 270 million were collected in 1918 under the Pittman Act and melted down for the silver.

Most of the Morgan Silver Dollars struck during its original production run were hoarded in bags of 1,000 coins by the mints due to the lack of popularity for carrying around these coins. The San Francisco Mint released hundreds of thousands of these hoarded coin bags in the 1940s and 1950s, much to the delight of collectors.

The Morgan Silver Dollar’s obverse face includes the image of Liberty created in 1878 by George T. Morgan. A Briton by birth, George T. Morgan came to the United States on a six-month trial position at the United States Mint. Not only would he create this design for the silver dollar, he’d go on to succeed Charles E. Barber as US Mint Chief Engraver upon the latter’s death in 1917.

On the reverse of all Morgan Silver Dollar coins you’ll find the image of an American bald eagle clutching arrows in one talon and an olive branch in the other. The eagle’s head is set facing the olive branch, a design facet typically used when the nation is at peace.

If you have any questions, please feel free to reach out to Silver.com with any questions about our US Silver Dollar Coins. Our customer service team is available at 888-989-7223, online through our live chat, and via our email address.