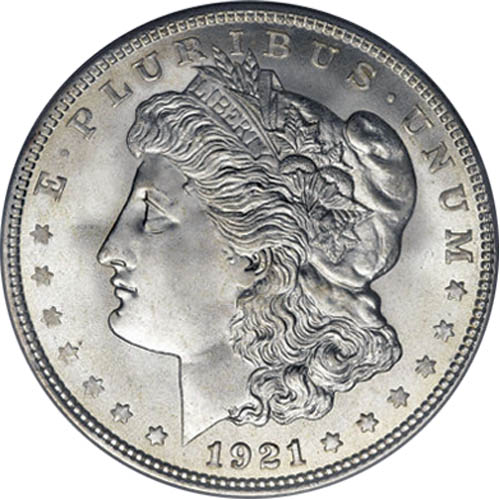 If there’s one silver coin that has long captured the imagination of numismatists in the United States, it’s the Morgan Silver Dollar. First introduced in 1878 at a time when silver coining had been on a five-year hiatus, the Morgan design gave the silver dollar coin new prominence in American circulation and enjoys greater popularity today than it did in its day. The Morgan Silver Dollar Coin is available to you online today at Silver.com from the final one-year coining in 1921!

The release of the Morgan Silver Dollar in 1878 was paved with the passage of the Bland-Allison Act. Five years earlier, the United States had ceased to produce silver dollar coins following passage of the Coinage Act of 1873.

At that point in history, the US Mint would actually accept silver from the public to be struck into coinage for a small fee. While the Bland-Allison Act restored the coining of silver dollars, the return of free coining would never happen.

George T. Morgan was a United States Mint Assistant Engraver at the time he developed the silver dollar design. Using Anna Willess Williams as inspiration for his design, Morgan would go on to aid in the creation of other coins and assume the position of Chief Engraver of the United States Mint in 1917 following the death of his boss, Charles E. Barber, who had held the position since 1879.

On the obverse of the Morgan Silver Dollar is the left-profile portrait of Liberty, with 13 stars arranged around her image. The reverse includes the image of the American bald eagle clutching arrows in one talon and an olive branch in the other. This design was replaced later in 1921 by the new Peace Silver Dollars.

The 1921 Morgan Silver Dollar marked the reintroduction of silver dollars after World War I, but it was a short-lived return for the Morgan design. The Philadelphia Mint struck 44.69 million coins that year with no mint mark, while the Denver Mint struck 20.34 million with a “D” mark and the San Francisco Mint struck 21.695 million with an “S” mint mark.

Each of the Morgan Silver Dollar 1921 coins in this product listing are in BU condition. Coins in this condition have no signs of wear and tear, though you may notice a range of minor flaws including breaks in the luster, spotted surfaces, and contact marks from the production process at the mint.

We encourage you to contact Silver.com at 888-989-7223 with questions or connect with us online using our live chat and email features.