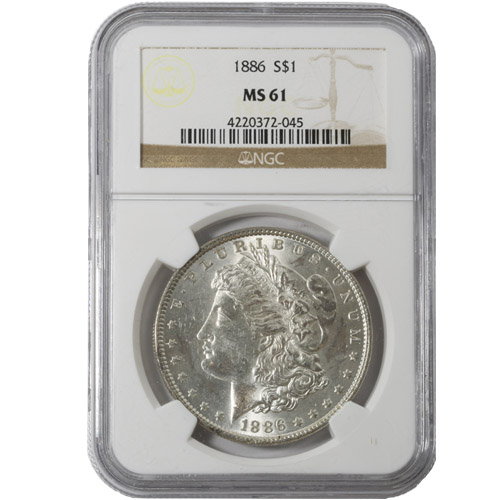 Morgan Dollars have become one of the hottest collectible silver coins from the 19th century, but during its heyday of production in the late-19th century its design was not well received by the majority of Americans. Surviving specimens today are largely represented by circulation pieces that have heavy signs of wear and tear, but there are those specimens that have garnered certification grades of Mint State 60 or higher. Today, Morgan Silver Dollars from the initial 1878-1904 issue period are available to you online at Silver.com with PCGS or NGC certification.

All of the Morgan Silver Dollars in this listing come with Mint State 61 grades from the PCGS or NGC. An MS61 coin features diminished or noticeably impaired luster. The surface area can feature a variety of flaws that include clusters of large and small contact marks, hairlines, and scuff marks.

George T. Morgan designed the obverse and reverse of the Morgan Silver Dollars, with the coins forever associated with him by name. The obverse side includes a Greco-Roman depiction of Lady Liberty in left-profile relief with the “Liberty” coronet on her head and wreath crown.

The reverse of Morgan Silver Dollars includes Morgan’s modified version of the heraldic eagle. The bird sits with its wings spread wide, arrows in one talon, and an olive branch in the other. It does not, however, have the national heraldic shield on its chest. The Morgan Silver Dollars represented one of the few coins of the era never to go through design changes. There are not different design types such as Type 1, Type 2, etc. Morgan’s original design was used from 1878 to 1904 and again in 1921 with no alterations.

Please remember that these coins are chosen at random. We do not reserve particular date marks. If you buy more than one, you may receive several matching date marks. Please feel free to contact Silver.com with questions. You can call us at 888-989-7223, chat with us live online, or email us directly.