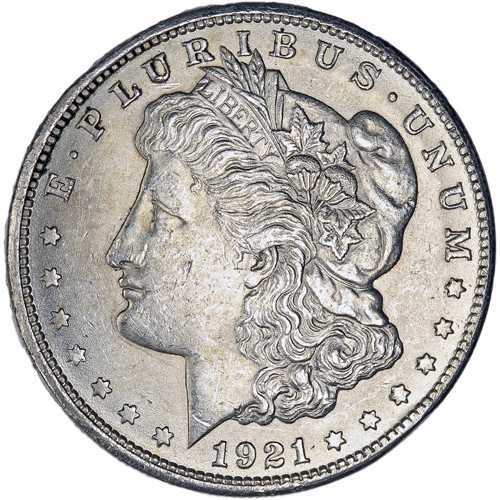 George T. Morgan was responsible for creating one of the most historically coveted coin designs in the history of American coinage. Designed in 1878 and in circulation until 1904, the Morgan Silver Dollar coin is one of the more coveted US circulation coin designs among collectors. Today, the Morgan Silver Dollar coin is available to purchase from Silver.com.

The release of the Morgan Silver Dollar in 1878 was paved with passage of the Bland-Allison Act. Five years earlier, the United States had ceased to produce silver dollar coins following passage of the Coinage Act of 1873.

At that point in history, the US Mint would actually accept silver from the public to be struck into coinage for a small fee. While the Bland-Allison Act restored the coining of silver dollars, the return of free coining would never happen.

George T. Morgan was a United States Mint Assistant Engraver at the time he developed the silver dollar design. Using Anna Willess Williams as inspiration for his design, Morgan would go on to aid in the creation of other coins and assume the position of Chief Engraver of the United States Mint in 1917 following the death of his boss, Charles E. Barber, who had held the position since 1879.

On the obverse of all Morgan Silver Dollar coins is the image of Liberty inspired by portrait sessions Morgan had with Williams. Liberty is featured in left-profile relief wearing a wreath upon her head and is surrounded by 13 stars.

The reverse of the coin features the American bald eagle clutching an olive branch in one talon and arrows in the other. This image was used again in 2006 on the reverse of a silver dollar issued to commemorate the old San Francisco Mint facility.

Each Morgan Silver Dollar coin in this product listing comes from the one-year striking of the Morgans in 1921. Each one is in AU, or Almost Uncirculated, condition. Coins in this condition are very similar to BU coins, with only small traces of wear visible on the highest points of the coin.

Please don’t hesitate to contact Silver.com on the phone at 888-989-7223 with any questions about our US Silver Dollars. Our customer service team is also available online using our live chat and email services.