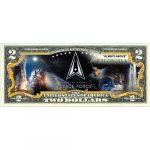 When it comes to buying legal tender notes, many collectors look for historic notes issued in decades past. While the Federal Reserve Note in the United States is revered as a stable, reliable fiat currency, the design of modern notes isn’t exactly the type of item a collector wants to put on display at home. However, some of the historic designs from previous forms of US paper money are worthy of a spot on the wall as an item displayed in a collection. Luckily, modern notes are now available to purchase with enhanced visuals on one side that have been altered by third-party dealers. These notes may be modern Federal Reserve legal tender, but each one also features the beautiful designs of historic American paper currency.

What are Enhanced Legal Tender Notes?

For the modern collector, historic US notes are extremely hard to come by. Examples such as the 1901 $10 Bison Note from the United States Note Series are believed to have less than 4,000 remaining specimens in varying conditions. However, that doesn’t mean you can’t own an affordable version of designs such as these on modern legal tender notes. Plucked from fresh, sealed packs of Federal Reserve Notes, some authorized dealers use proprietary processes to build on the credibility of US legal tender with beautiful designs from the nation’s history.

In the case of many of these enhanced legal tender notes, just one side of the note is enhanced with fresh imagery. Modern Federal Reserve Notes, for all the attention to detail that goes into designing these notes to prevent counterfeiting, lack the artistic detail once put into the effort of designing US paper money. The other legal tender notes we currently stock at Silver.com come with designs on the obverse face of the note that have been enhanced by authorized dealers using the latest technology.

These legal tender notes have high-definition graphics superimposed on the obverse that recreate the visuals of historic US notes. The effigies of the former US president or dignitary featured on the note are covered by the new graphics, but only serve to enhance the value of the legal tender note in the eyes of collectors. In most cases, the reverse design element remains the same as the notes that eventually make it into circulation.

Given the limited ability of this enhancement process to increase the value of the note beyond its face value, many dealers focus on the three smallest denominations of US paper money. This includes the $1, $2, and $5 bill of the Federal Reserve Note Series. The $1 and $5 bill are two of the widest circulated denominations in the Federal Reserve Note, and though the $2 bill is widely produced by the United States, it does not enjoy the same level of circulation. This makes all three notes ideal candidates for enhancement with authorized dealers.

As much as possible, dealers try to use the modern Federal Reserve Note that coordinates with the same denomination from a previous form of paper currency issued in the United States when issuing unique, modern legal tender notes. Whenever possible, dealers stick to the denominations that these designs originally appeared on, whether that was the Silver Certificate, United States Note, or National Bank Note Series. It is important to note that these dealers don’t select just any design. In fact, many of the reimagined designs you will find on these notes come from the top-ten US note designs of all time. Examples include the following:

History of US Notes

The earliest form of US paper currency was released before the existence of the United States of America. The Continental Congress issued paper money, but it was widely considered a useless form of money that was hard to get even American citizens to accept as a form of payment. Early in the Civil War, the administration of President Abraham Lincoln issued Demand Notes as a measure to help fund the Union Army during the war. However, it wouldn’t be long before some long-standing forms of paper money would begin emerging from the United States:

While many of the designs and note types discussed above are no longer in production, and even fewer still exist for collectors to purchase, that does not mean it is impossible to own these designs at an affordable price. Silver.com customer service can assist you with any questions about these legal tender notes at 888-989-7223, online through our live chat, and via our email address. For questions regarding our payment methods, please visit our Payment Methods page for more answers.