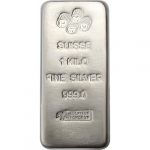 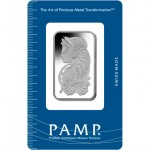 PAMP Suisse is one of the world’s most respected refining facilities. In fact, by most measures of success and demand, PAMP Suisse products are the most recognizable and preferred precious metal offerings in the market right now. A private minting operation based out of Switzerland, PAMP Suisse has built a global brand that is unmatched by most other private refineries and all but a few sovereign mint locations.

The refiners at PAMP Suisse produce an impressive array of products on an annual basis that range from mint-branded bars to those with intricate designs. You’ll find PAMP products available on Silver.com in all four major precious metals: gold, silver, platinum, and palladium. Take a walk through the Silver.com catalog of PAMP Suisse products below!

The refinery at PAMP Suisse is a private facility that was founded in Ticino, Switzerland in 1977. Today it is considered the world’s leading bullion brand, holding dominant positions in the major precious metal markets of the world and operating state-of-the-art refining and fabrication facilities.

PAMP Suisse refines roughly 450 tonnes of gold on an annual basis, and holds the distinction of being the first in the precious metals industry to place designs on the reverse side of its small bars. Its most popular product lineup, without question, is the Fortuna Bar. Available in gold, silver, and platinum, with sizes ranging from 1 Gram to 100 oz, the Fortuna Bar is one of the most diverse offerings you’ll find on the modern precious metals market.

The company is now part of the MKS Group based out of Geneva, Switzerland. The combined company offers more than a century of experience in precious metals production and trading. MKS Global has offices around the world specializing in precious metals and financial planning.

Arguably the most popular precious metal bar design in the world, the Fortuna bars from PAMP Suisse have an obverse design featuring the Roman goddess of luck and fortune, Fortuna. She was perhaps best known as the Roman goddess of fortune, but Fortuna also held numerous other titles and roles in Roman culture. As a goddess she was not just consider influential over fortune, but also over bounty and a protector of grain supplies. In Roman religion, she was considered emblematic of luck.

Struck over multiple years and featuring different designs, these bars include obverse images representing the 12 animals on the Chinese Lunar Calendar. PAMP Suisse uses a front-and-back design that displays one scene on the front and the backside of that same design on the reverse. There is a new design on each year’s release of the PAMP Suisse Lunar bar. Unlike the Fortuna lineup, the Lunar Bars from PAMP Suisse are only available in gold and silver, but similar to the Fortuna offerings, you’ll find the Lunar Bars available in a variety of affordable weights.

Currently, Silver.com offers six different PAMP Suisse Lunar bar designs dating back to the 2012 release of the Year of the Dragon Bar. Below you’ll find a brief rundown on each of the offerings:

PAMP Suisse Lunar Bars are available in weights ranging from 1 Gram up to 1 Troy oz and 10 Troy oz. These bars from PAMP Suisse ship to you inside of a sealed, plastic assay card to validate your purchase and protect its condition.

Among the collection of PAMP Suisse branded silver and gold bars, you’ll find an exciting new platinum divisible bar from the mint. The 25 Gram Platinum Bars from PAMP Suisse feature divisible technology that allows you to purchase a 25 gram bar, but divide it at a later date into as many as 25 individual 1 Gram bars. There is no loss of purity or metal content in the division process either, making these bars an excellent investment.

On the obverse face of the bar you’ll find the PAMP Suisse logo, as well as the individual weight, purity, and metal content of each 1 Gram platinum bar. The reverse of each bar has the PAMP Suisse corporate name engraved. Each individual bar has a serial number that corresponds to the number located on the assay card. All of these bars are new products that ship in sealed plastic.

Most investors and collectors look to sovereign government mints for annual release products. However, sovereign government mints around the globe serve a dual role of producing national currency for everyday use, as well as bullion and proof coins designed to attract the attention of investors and collectors who prefer precious metals to the modern stock market. As a result of this, supply and availability of these programs is much lower because the mints are often pursuing two lines of production.

If there’s one thing that sets sovereign and private mints apart, it is the variety and pricing of precious metal products. Private mints often produce precious metals with the greatest level of variety, and lower premiums over the spot price of gold, silver, platinum, and palladium. On top of that, the lack of coin production for circulation currency allows private mints to devote all of their silver, gold, platinum, and palladium inventories to bar production and do so without worrying about minimum production levels.

You have many payment options available to you to complete your purchase of PAMP Suisse products on Silver.com. We proudly accept Visa and MasterCard credit/debit cards, paper checks, bank wire transfers, and PayPal transfers. Each form of payment comes with different benefits. Paper checks come with the benefit of high maximum purchase ceilings and a 4% discount on your purchase price, but take up to six business days to process.

All Silver.com products are shipped via the United States Postal Service or UPS with discreet packaging used to protect the identity of your products. Silver.com offers an affordable, tiered shipping scale to ensure your products ship at a rate you can tolerate. All orders in excess of $3,000 include free standard shipping and insurance. If your orders are lost or stolen during shipping, Silver.com will work with the carrier to recover your shipment or file an insurance claim on your behalf to recover your funds.

If you have any questions about PAMP Suisse products, please don’t hesitate to reach out to a Silver.com associate. You can contact us on the phone at 888-989-7223, connect with us online through our website’s live chat feature, or submit your questions to us via email.