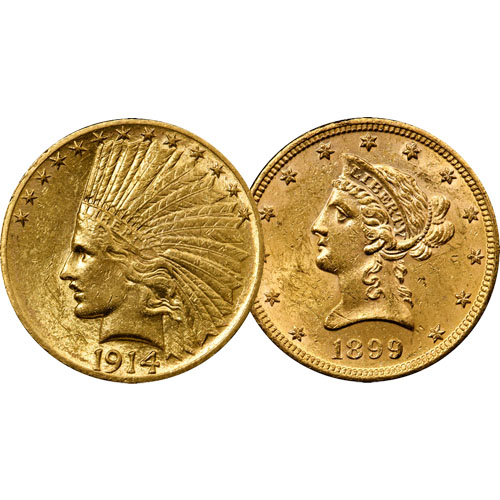 The final two designs of the Gold US Half Eagle Series were the Liberty Head and the Indian Head designs. The Liberty Head design will forever be remembered as the longest-used design in the series, while the Indian Head Eagle is arguably the most unique design for its use of an incuse design strike. Today, Pre-33 Gold $10 Indian and Liberty Eagle 2-Coin Sets are available to you online at Silver.com.

The Liberty Head Eagle design series was the longest-running option in the series. It was used from 1838 until 1907, a timeframe that saw the United States win the Mexican-American War, see an influx of gold following the California Gold Rush, and deal with the struggles and aftermath of the Civil War. The Indian Head Eagle was one of the first American coins issued with indigenous elements to the design as Liberty wears a feathered headdress in the design. Together, these coin designs represent 90 years of history in the Half Eagle design collection.

All Pre-33 Gold $10 Indian and Liberty Eagle 2-Coin Sets come with individual plastic flips for each coin. The coins you receive are in About Uncirculated-plus condition. Coins in this condition boast only light or trace wear patterns on the highest relief points of the coin, with medium or near-full mint luster still present. The possible date marks for Liberty coins include 1838 to 1907, while the date marks for the Indian coins range from 1907 to 1933.

On the obverse of the Gold $10 Indian and Liberty Eagle Coins in this set feature Lady Liberty in two different reliefs on the coins. The Liberty Head design was known as the Coronet Head and featured Liberty’s bust in left-profile relief with a coronet crown. The Indian Head design was the first image of indigenous elements as the portrait of Liberty wears a feathered headdress.

The reverse of the coins of the Pre-33 Gold $10 Indian and Liberty Eagle 2-Coin Set feature effigies of the American bald eagle. The Liberty Head coin comes with the heraldic eagle of the United States. The Indian Head coin features a bald eagle perched on a sheaf of arrows with its wings at its side. Liberty Head coins were initially struck from 1838 to early 1866 without the national motto of IN GOD WE TRUST. This was added to the coins in mid-1866 and present on the reverse through 1907.

Please contact Silver.com if you have any questions when you buy gold. Our team can assist you at 888-989-7223, online using our live chat, and via our email address.