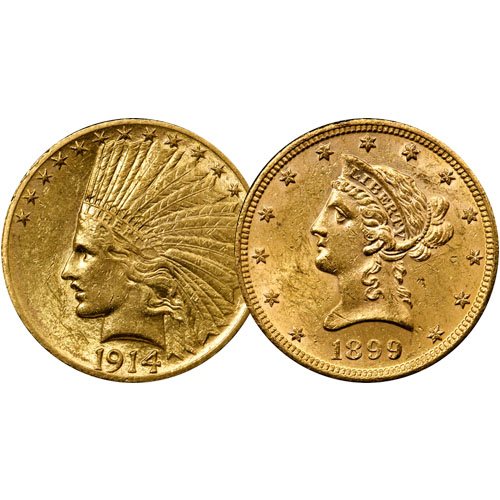 When it comes to historic gold for sale, the denominations of the US Eagle series are some of the favored pieces with American buyers. The US Eagle gold coins were in circulation from 1795 to 1933, but millions of coins were melted down by the Federal Reserve in the 1930s during the Great Depression as the Treasury sought to shore up the nation’s gold bullion reserves. Right now, Pre-33 Gold $10 Indian and Liberty Eagle Two-Coin Sets are available to purchase online at Silver.com.

Each Pre-33 Gold $10 Indian and Liberty Eagle Two Coin Set you receive comes with two coins from the Gold $10 denomination in the Indian Head and Liberty Head design collections. The Indian Head coins carry possible dates of 1907 to 1933, while the Liberty Head coins have possible dates from 1838 to 1907. The coins you receive will have varying dates. Each one is in XF+ condition, an indication that light wear is present only on the highest relief points and that some mint luster may still be present.

The Liberty Eagle and Indian Eagle coins represent more than half of the production life of the Gold $10 Eagle denomination. These two designs were struck consecutively for nearly 100 years from 1838 when the Liberty Head debuted until 1933 when the last Indian Head coins were struck.

On the reverse of the Pre-33 Gold $10 Indian and Liberty Eagle Coins is the American bald eagle. The Liberty Head coin features the image of the heraldic eagle. The Indian Head coin shows a bald eagle resting on a sheaf of arrows with its wings at its side.