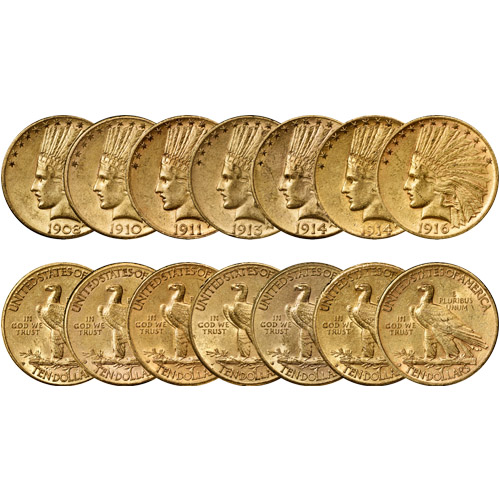 The gold coins of the Pre-33 Gold Eagle Series included the $10 denomination as the primary unit. These coins were issued from 1795 to 1933, with the Gold Indian Eagle design series struck from 1907 to 1933 marking the final release of the collection. Now, Pre-33 Gold $10 Indian Eagle 7-Coin Rare Date Sets are available to you for purchase online at Silver.com.

Pre-33 Gold Indian Eagle Coins in the $10 denomination were heavily circulated from 1907 to 1916. The entry of the US into World War I severely curtailed the production of the coins until the 1920s. Between decreased mintages and heavy circulation, few coins remain from these early dates in the series that are in good condition for collectors.

Another key factor impacts the availability of these dates in good condition. During World War I, countless Gold Indian Eagles were shipped to Europe as foreign payments during the war. These coins were often held in bank vaults in money bags and picked up substantial damage from contact inside the bags.

Of the coins in this Pre-33 Gold $10 Indian Eagle 7-Coin Rare Date Set, the importance of each coin is noted below:

The obverse side of the coins in the Pre-33 Gold $10 Indian Eagle 7-Coin Rare Date Sets comes with a depiction of Liberty. She is featured in left-profile relief with a feathered headdress. On the reverse of Pre-33 Gold $10 Indian Eagle Coins is an American bald eagle. The eagle is perched on a sheaf of arrows with an olive branch wrapped around it.

These Pre-33 Gold $10 Indian Eagle 7-Coin Rare Date Sets come with plastic flips for each individual coin. The coins are all in Extremely Fine+ condition. Coins in this condition showcase only light wear and tear on the highest points of relief, with some traces of mint luster still present.