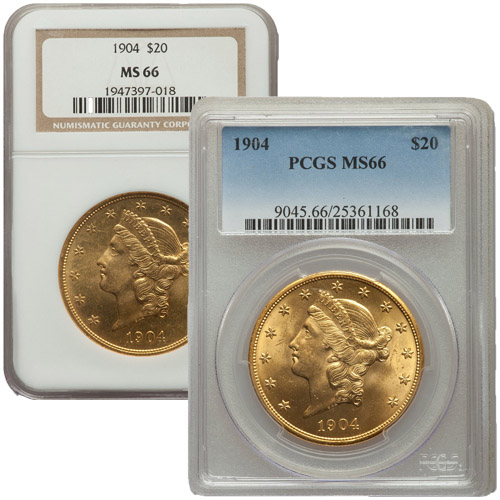 The United States Mint’s largest denomination coin in history was the $20 Gold Double Eagle. The term double eagle referred to the program as a whole, the Gold Eagles being the first gold coins ever struck by the United States Mint, as well as the specific denomination of the coin as a $20 (USD) specimen. The standard Gold Eagle was a $10 (USD) coin. Right now, Pre-33 Gold $20 Liberty Double Eagle Coins are available to purchase online at Silver.com with certification.

Each Pre-33 $20 Gold Liberty Double Eagle Coin in this product listing comes to you with a protective plastic slab and a Mint State 66 certification. Coins in MS66 condition exhibit above average quality for the surface and mint luster. The coins feature no more than three or four minor contact marks and a few light hairlines only visible under certification.

On the obverse of the Pre-33 Gold $20 Liberty Double Eagle coins is a left-profile bust of Lady Liberty. She wears her hair back in a slight bun with a crown on her head that has the word “Liberty” inscribed upon it. There are 13 stars around her portrait and the date of issue is stamped at the bottom of the design field.

The reverse of Pre-33 Gold Liberty Double Eagle Coins includes a version of the heraldic eagle of the United States based on the Great Seal of the United States of America. The Gold Liberty Double Eagles went through three iterations of design on this side. The initial coins lacked the national motto “In God We Trust” from 1849 to 1866 and had the face value listed simply as “twenty D.” The national motto was added in 1866. In 1876, the mint altered the face value to read “Twenty Dollars” instead.

If you have any questions about these gold coins, please feel free to ask. Our customer service team is available to you at 888-989-7223, chat with us live online, or email us directly.