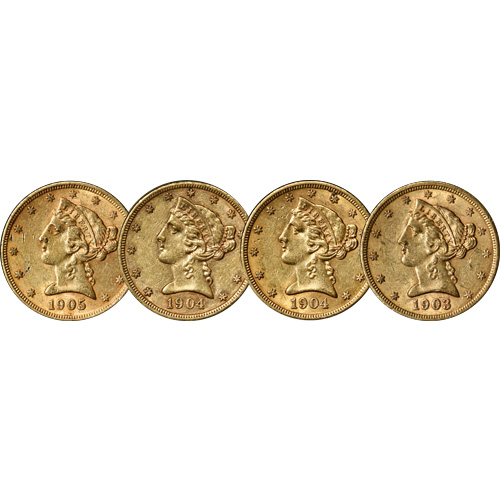 The Gold Liberty Half Eagle Coin was struck by the United States Mint from 1838 to 1908 and holds the distinction of being the only denomination in the US Eagle Series to be issued by all seven US Mint branch facilities. Now, Pre-33 Gold $5 Liberty Half Eagle 4-Coin Sets are available to you for purchase online at Silver.com.

The Liberty Head effigy on US Eagles was created by Christian Gobrecht, the 3rd Chief Engraver of the United States Mint. He redesigned the Liberty Head image for the US Gold Eagles in 1838. Coins in the series had previously featured the Classic Head design of Liberty that had been designed by the US Mint’s 2nd Chief Engraver, William Kneass.

Over the course of 70 years in production, the US Mint used all of its branch mints to strike the Half Eagle. Production started in Charlotte and Dahlonega in 1838 and continued until 1861. The New Orleans Mint issued the coins from 1840 to 1861. The other mints to issue the coins in the 19th century were the Philadelphia Mint, San Francisco Mint (from 1854), and the Carson City Mint from 1870-1893. As this coin set includes only post-1900 date marks, the Philadelphia, San Francisco, and Denver Mints were the only mints issuing the Gold Liberty Half Eagles between 1900 and 1908.

The obverse of Pre-33 Gold $5 Liberty Half Eagle Coins comes with the Gobrecht design known as the Liberty Head. This effigy of Liberty includes a left-profile portrait with 13 stars around the bust and a date mark at the bottom of the design field.

On the reverse face of Pre-33 Gold $5 Liberty Half Eagles is the heraldic eagle of the United States. This is the second iteration of the design on the Liberty Half Eagle and includes a banner above the eagle that reads “In God We Trust,” an addition that was made in 1866.

These Pre-33 Gold $5 Liberty Half Eagle 4-Coin Sets come with only post-1900 dates. The last eight years of production were 1900 to early 1908 when the image was replaced by the final design, the Indian Head. The coins in this set are dated 1900 to 1908, but your set will not have any duplicate dates. You’ll receive four distinct dates. All coins are in Extremely Fine+ condition with light wear and friction present on the highest points and some of the original mint luster still present. Some of these coins may have slightly better visuals, but still within the same XF range.

Silver.com customer service is available at 888-989-7223. You can also contact us online with questions when you buy gold by using our live chat and email address features.