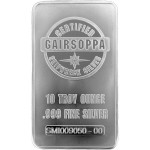 S.S. Gairsoppa shipwreck silver is a precious metal excavated from the site where the ship sank during World War II. A few years ago, a salvage company discovered the sunken vessel and its precious cargo — a whopping 61 tons of silver treasure worth $38 million. Read on to learn more about the ship, the salvage process, and how investors and collectors can own a piece of the recovered silver.

The History of the S.S. Gairsoppa

Launched in 1919, the S.S. Gairsoppa enjoyed a productive civilian career as a steam merchant ship for the British India Steam Navigation Company of London. The company, one of the biggest ship owners in history, boasted a fleet of more than 500 vessels. British India Steam took over the Gairsoppa during her construction in Jarrow, England. The company named the ship after the spectacular waterfalls of Karnataka, India. At 399 feet long, the Gairsoppa could reach speeds of up to 10.5 knots (about 12 mph), making it an ideal transport ship.

During World War II, the U.K. recruited the S.S. Gairsoppa as a cargo ship to help the war effort. In December of 1940, the ship was loaded with tea, pig iron, and an astonishing amount of silver ingots — 7,000,000 ounces to be exact — for transport from Calcutta to the Royal Mint of Britain. En route to Britain, the Gairsoppa joined a convoy in February 1941 but broke away to get to port due to a lack of fuel.

A German aircraft spotted the Gairsoppa making her way toward Galway, Ireland and alerted a U-boat to her location. The U-boat fired a torpedo at the Gairsoppa on February 17, 1941, sinking her and killing 85 people. The boat sank about 300 miles southwest of Galway, buried three miles under the surface of the Atlantic Ocean.

In 2010, the U.K. awarded a salvage contract to Odyssey Marine Exploration to excavate the cargo of the Gairsoppa. The Florida-based company used a deep-tow, low-frequency sonar system to find the wreck and then used a remotely operated vehicle for visual inspections. Odyssey performed the actual recovery operation using the Seabed Worker, a ship equipped with a number of deep-ocean tools, such as steel cutters and a high-powered crane.

Odyssey was able to recover almost all the Gairsoppa’s silver in about two months. Odyssey sent the recovered silver to the Sunshine Mint in Idaho where it was transformed into a variety of collectible silver pieces, including bars, coins, and rounds.

Of the 2,792 1,000-troy-ounce silver ingots recovered from the Gairsoppa so far, only 462 bars have been distributed publicly. However, the leftover bars have been melted and re-minted into 10-ounce bars for an affordable, commemorative option for collectors or investors. Two versions of the bars exist: version 1, which does not bear the date the ship sank, and version 2, which does. The manufacturer is no longer making version 1, so buyers who want bars in new condition should opt for version 2.

The obverse side of the bars features the words “Certified Gairsoppa Shipwreck Silver 10 Troy Ounce .999 Fine Silver” and a serial number. The reverse side bears a profile view of the ship in the 1920s with the words “S.S. Gairsoppa February 17, 1941.”

As another option, collectors may purchase one-ounce Gairsoppa silver rounds minted with silver salvaged from the wreck. Each round contains one troy ounce of .999 fine silver. Investors often purchase this option in mint tubes of 20, which include a serialized security seal on the transparent tube that certifies the shipwreck silver. However, you can purchase individual coins that come in sealed plastic capsules. The rounds and coins bear the same inscription and general design as those described for the silver bars.

You can trust Silver.com to ship your products safely and discreetly. We ship all purchases in nondescript packages so the carrier cannot determine the contents. Items are carefully packaged with heavy plastic bags, bubble wrap, coin flips, and custom materials when necessary to ensure the safety of your purchases. Items are also fully insured. Orders over $3,000 include free shipping, and we offer a variety of shipping methods depending on the cost of the order.

With S.S. Gairsoppa shipwreck silver, you can hold a valuable piece of world history in your hands. Purchase your Gairsoppa silver bar, rounds, or coins. Start growing your collection and your investment today with Silver.com.