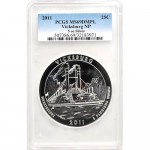 Following the conclusion of the US state quarters program in 2008, the United States Mint saw a swell in demand for the unique designs that had represented each of the 50 states on that coin program. Rather than introducing a new round of unique designs on circulation quarters as it had done with the state quarters program, the US Mint designed and struck a series of bullion coins that honored the national parks, forests, and monuments found across the country on the America the Beautiful series.

Overview of the America the Beautiful Quarters

The America the Beautiful quarter program was a direct result of the state quarters program that ran from 1999 to 2008, as well as the subsequent US federal district and territories program in 2009. The series was introduced through passage of the America’s Beautiful National Parks Quarter Dollar Coin Act of 2008.

Known as the ATB program, the 56-coin series from the US Mint features a unique design depicting a national park, national forest, or other national site from each of the 50 US states, the federal district of Washington DC, and the five overseas territories of Guam, Puerto Rico, US Virgin Islands, Northern Mariana Islands, and American Samoa. The program consists of five new coin designs released each year, with the first coins released in 2010 and the program scheduled to run through 2021.

The Secretary of the Treasury does have the power to extend the program through 2033, with additional designs and represented districts unknown at this point in time. Each coin will resemble a standard circulation quarter, but features .999 fine silver and is struck at five times the size of a quarter for a total weight of 5 oz.

The obverse side of all ATB silver coins bears the common image of President George Washington found on circulation quarters. The left-profile portrait of President Washington was refined in 1932 by artist John Flanagan, and inspired by an original 1786 bust of Washington created by sculptor William Cousins.

For the second production year of the America the Beautiful quarters, the US Mint released five new design features representing different states across the country. As with other years, the states represented appear in order of the age of the site featured on the coin. Throughout the whole series, and in each production year, coins are released in an oldest-to-youngest format. In this system, the nation’s oldest established parks, forests, and monuments appear first. Coins featured in the 2011 ATB Silver Coin range include:

In addition to 2011 ATB Silver Coins in Brilliant Uncirculated condition, Silver.com also has a variety of coins from this production year that have been certified by the world’s top grading services. The Numismatic Guaranty Corporation and Professional Coin Grading Service are highly respected, and when coins receive a grade from either organization, it instills immediate additional value.

Common terms and definitions used by both the NGC and PCGS are found below:

At Silver.com, we gladly accept various payment methods with your purchase of a 2011 ATB Silver Coin. We accept all major credit/debit cards, paper checks, bank wires, and PayPal money transfers. A brief breakdown of each is featured below:

Silver.com proudly offers a flexible pricing schedule for shipments that is tiered based upon the amount of your total purchase. All shipments are packaged and shipped following processing of payment. Your products arrive in discreet packaging courtesy of the US Postal Service or UPS in an effort to protect your package at all times. Free shipping and insurance are offered for purchases exceeding $3,000. If your package is lost or damaged while in transit, we work directly with the carrier to recover your products, or file an insurance claim on your behalf to provide replacement products or secure a refund of your payment.

Please direct any questions you have regarding 2011 ATB Silver Coins or Silver.com policies to one of our associates at 888-989-7223. You can also find our team members conveniently online through our live web chat and email services.