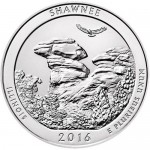 At the turn of the 20th century, the United States Mint announced a radical change to the American circulation quarter that would see new reverse designs released on the coins for the first time in decades. President George Washington’s image would remain on the obverse, but the reverse image would be replaced over the course of a decade with scenery representing each of the 50 US states. The state quarters program ran from 1999 to 2008, and was so popular that it pushed the US Mint to create and release the America the Beautiful quarters program.

Differences between State Quarters and America the Beautiful

Given the immense popularity of the Mint’s state quarters program, Congress, the Treasury Department and Mint came together on a new quarter program that would again represent all of the 50 US states, as well as other districts and territories within the United States. These new coins would differ in one significant way from the state quarters program.

While the state quarters featured new reverse imagery on the circulation quarter, made of a nickel and copper alloy, the America the Beautiful coin program would be struck for investment and collectible purposes. Each ATB Silver Coin is five times larger than the average circulation quarter, weighing in at 5 oz, and contains .999 fine silver.

Although America the Beautiful Silver Coins are considered legal tender for all debts public and private, with a face value of $.25 (USD), the value of their silver content makes them worth far more than their quarter face value. The bullion version of the coins qualifies for use in Precious Metal IRA accounts, while the collectible proof versions feature brilliant finish and a stunning visual appearance.

Overview of America the Beautiful Quarters

America the Beautiful is a 56-coin commemorative series that honors the nation’s national parks, national forests, and historic monuments. Authorized by Congress with passage of the America’s Beautiful National Parks Quarter Dollar Coin Act of 2008, the series was established with a release schedule that features five new coin designs each year. Launched in 2010, the program is slated to run through 2021. The Secretary of the Treasury holds the authority to extend the program through 2033 if so desired.

The coin series will feature a representative image from each of the 50 US states on the reverse side of a 5 oz commemorative silver coin. Five new jurisdictions are represented each year, with the United States Mint releasing coins in an oldest to youngest order dependent upon the official federal establishment of the federally protected land represented on the coins. The series will feature all 50 US states, the federal district of Washington DC, and the five overseas territories of the United States: Guam, Northern Mariana Islands, American Samoa, Puerto Rico, and the US Virgin Islands.

On the obverse side of each quarter will be an updated and refined version of John Flanagan’s 1932 portrait of President George Washington. The nation’s first democratically elected leader, President Washington has been on the obverse of circulation quarters since 1932, but Flanagan’s design is actually a reimagining of a bust of the president created in 1786 by sculptor William Cousins.

The image of the reverse side will be the national forest, national park, or historic monument chosen to represent each individual state. The site selection process involved in the America the Beautiful Silver Coin program started with a collaborative effort between the governor or chief executive of each jurisdiction in question, the Secretary of the Treasury, and the Secretary of the Interior.

From there, each site was evaluated for its relevance to national history and its role in the natural habitat and environment of the jurisdiction in question. The United States Mint then reviewed the sites selected for all 56 jurisdictions, and then conferred with the Secretary of the Interior for final approval of all designs.

The first coins were released in 2010, and the 2016 ATB Silver Coins available on Silver.com represent the seventh year of production, with the coins (31 through 35 in the series) representing the following states; Illinois, Kentucky, West Virginia, North Dakota, and South Carolina.

The Shawnee National Forest in southern Illinois was chosen as the site to represent the state in the ATB Silver Coin series. The area was originally exhausted farmland that the government began to purchase during the Great Depression. The Civilian Conservation Corps planted thousands of pine trees in the region to help fight back against soil erosion and to help rebuild natural habitats for the various animal species of the region.

The United States Mint decided upon a depiction of the famous Camel Rock in the forest. The design offers a close-up view of Camel Rock, with natural hardwood pines visible in the foreground, while a red-tailed hawk flies overhead.

Kentucky might like to have a conversation with Missouri about which state was the first to welcome explorers to the West. The Cumberland Gap in Kentucky is a large, open natural break in the Appalachian Mountains that has served for centuries as a natural game trail for animals moving throughout the region. Native American tribes relied on the area as a source of food, following the migratory animals through the region.

Early American settlers used this natural break in the mountain range to gain access to the deeper interiors of the United States, earning the Cumberland Gap the nickname of “America’s First Doorway to the West.” The reverse image used by the United States Mint is that of a frontiersman with his long rifle standing near the Cumberland Gap, gazing into the vast wide-open space of the American interior.

The state of West Virginia is represented by a site along its border with neighboring Virginia that proved important at various points in American history. Situated at the confluence of the Potomac and Shenandoah Rivers, Harpers Ferry earned its name after Robert Harper purchased the land from the Virginia state legislature in 1751. He set about building a ferry service on the peninsula that jutted out in the confluence of the rivers.

General George Washington made Harpers Ferry an ammunition depot during and after the Revolutionary War, and the abolitionist John Brown made a famous stand at the depot prior to the Civil War as he led a group of rebels to capture Harpers Ferry. The old firehouse he held out in against a siege from US Marines is the oldest remaining building.

That old firehouse is featured on the reverse of the 2016 West Virginia ATB Silver coin. After the attack and capture by John Brown, the firehouse earned the nickname “John Brown’s Fort,” a name that is engraved on the coin in memory of the site’s historic significance.

President Theodore Roosevelt was a brash and confident man, known for bringing a sense of rugged toughness to the White House. Among other things, his Great White Fleet showcased American power around the globe for the first time, and he was the last president to openly carry a firearm in the White House.

President Roosevelt was also an avid outdoorsman and the founder of the country’s national park system. Theodore Roosevelt National Park in the state of North Dakota commemorates the president’s fondness and deep ties to the state. He first came to the area in 1883 on a bison hunt, and immediately fell in love with the area.

Over the course of the next two decades he would establish a ranch and home throughout the North Dakota Badlands. The national park named in his honor is one of the most unique in the country, as it is split into three separate sections separated by as much as 75 miles. All pieces of property within the park lie along the banks of the Little Missouri River.

North Dakota’s 2016 ATB Silver Coin features a depiction of a young Theodore Roosevelt on horseback as he surveys the valleys and cliffs surrounding the Little Missouri, which flows into the background.

The state of South Carolina has a rich tradition of coastal defenses dating back to the founding of the nation. Fort Sumter is well-known for its role at the start of the Civil War, but nearly a century earlier, Fort Moultrie defined the state and held off the British Navy. Fort Moultrie was garrisoned by the 2nd South Carolina Regiment, and its brave 200-man defense held off a naval flotilla looking to invade Charleston.

Fort Moultrie was originally constructed from rugged, yet flexible palmetto logs. The original flag that flew over Fort Moultrie gave rise to the eventual design of the state’s official flag. Today, it is remembered for guarding America’s East Coast for almost 150 years.

On the reverse side of the coin is the image of a sergeant from the 2nd South Carolina Regiment racing into the midst of a bombardment to retrieve, and eventually replace, the Fort Moultrie flag atop the ramparts, serving as inspiration for the defenders inside.

Silver.com accepts a variety of payment methods for your purchase of 2016 ATB Silver coins. You can pay for your brand new 2016 ATB Silver coins using Visa and MasterCard credit/debit cards, with an average processing time of one business day. We also accept paper checks, with a four to six business day processing time, and bank wire and PayPal transfers. The latter two forms of payment process immediately, while bank wire and paper check payments qualify for a 4% discount on the purchase price.

We offer an affordable, tiered shipping price that is dependent upon your overall purchase amount. If your purchase exceeds $3,000, you qualify for free standard shipping and insurance. If you would like expedited shipping, it is available at an extra charge. All Silver.com products ship via the United States Postal Service or UPS.

If you have any questions, please feel free to reach out to us at Silver.com. Our associates are available on the phone at 888-989-7223, online using our live web chat, and via email.