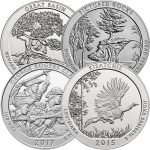 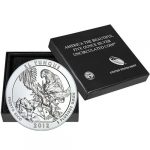 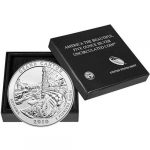 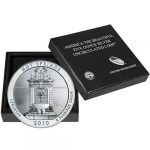 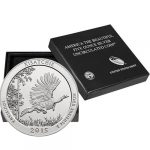 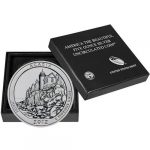 From the moment the United States Mint introduced the America the Beautiful Series, the stunning 5 oz silver coins were produced in two versions. The Brilliant Uncirculated bullion coin, intended for investors, has the typical visual finishes you’ll find on any BU coin from the United States Mint. To ensure there was an option available to collectors, the US Mint also introduced a Burnished ATB coin that is produced in a manner similar to the burnished coins in the Gold Eagle and Silver Eagle collections.

The blanks used in the production of Silver Burnished ATBs are treated differently throughout the coining process. Before coining takes place, the US Mint tumbles the blanks in a barrel or drum with a polishing medium. Sand was once used for this process by mints around the world, but the modern era has seen the introduction of specially-made spheres that burnish the blanks before coining. Each blank is removed individually with a gloved hand and placed in the coining press for striking. The die strikes the blank just one time to press the designs into the surface. The blank, now coin, is then removed individually by gloved hands and vapor-blasted by the mint to create a matte finish. In the end, the coins have clean fields with matte visuals as a result of this enhanced treatment.

Silver Burnished ATBs are produced by the Philadelphia Mint, and unlike the BU coins, each one features a mint mark. On the obverse side of the Burnished ATBs beneath the inscription of “In God We Trust,” you will find a small “P” mint mark denoting the Philadelphia Mint as the point of origin. Prior to the launch of widespread coining in 2010, the US Mint installed a new coining press at the Philadelphia Mint to produce the 5 oz silver bullion coins in this collection. The new coining press, built in Germany and installed in March 2010, can produce 1,000 metric tons of pressure and produce as many as 1 million coins annually in the series. From the beginning, Sunshine Minting has provided the silver blanks used in coining the Silver ATB coins.

History of the ATB Series

The ATB Series was authorized for production via an Act of Congress. The America’s Beautiful National Parks Quarter Dollar Coin Act of 2008 included provisions within its wording for the production of circulation America the Beautiful quarters, and in Title II of the bill, the 5 oz silver bullion coins. Each year, five new designs are released by the US Mint. The designs and the jurisdiction represented are chosen in order of age. The series starts with the oldest federally-protected sites and works its way toward sites most recently added to the register of federally-protected sites. The program runs from 2010-2021, with only the 2021 release featuring just one design to conclude the 56-coin collection.

If you have any questions about Silver Burnished ATBs, Silver.com customer service would be happy to assist. Our team is available to you at 888-989-7223, online through our live chat, and using our email address. If you have questions about acceptable forms of payment or applicable purchasing minimums and maximums, please visit our Payment Methods page. You are welcome to reach out to our customer service team if you still have questions regarding payment methods.