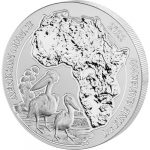 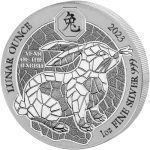 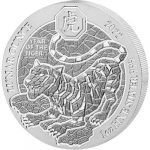 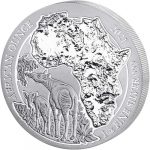 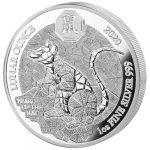 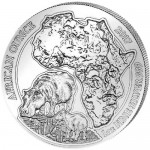 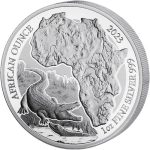 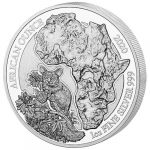 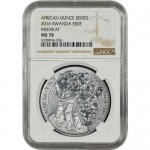 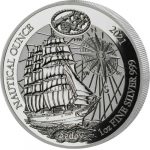 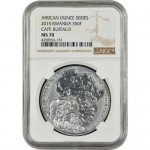 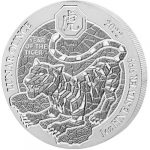 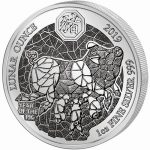 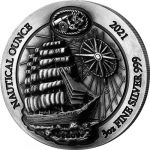 When it comes to the production of silver bullion coins, the nations of Africa lag behind other nations of the world in issuing brilliant, investment-grade bullion coins on the international stage. If you look deep enough though, you’ll find two shining examples of impressive coin design from the African continent. The African Wildlife Series issued on behalf of Somalia is a popular program, and the Rwanda Wildlife Series coins are gaining attention for their own unique and innovative designs. Silver.com proudly carries the coins of the Rwanda Wildlife Series Silver Coins for both investors and collectors.

The Rwanda Wildlife Series silver coins were first introduced in 2008 as the second, and increasingly popular, bullion coins issued by a nation from the African continent. The coins bear the term wildlife because each new release features a different animal species that is native to the continent. Although the coins are labeled Rwanda Wildlife Series coins, the animals are not specifically native to Rwanda, though many of them can be found living in the wilderness of Rwanda.

Rwanda Wildlife Series coins are produced following a familiar design and motif concept that is used by a number of other mints, as well as other popular bullion coin programs. Starting with the first 1 oz Rwanda Wildlife Series coin in 2008, a new image is introduced on the reverse side of the coin. The obverse face of each coin bears the official seal of Rwanda, as well as a number of engravings.

All coins in the Rwanda Wildlife Series are struck and distributed by Germany’s BH Mayer Mint. As is expected from German facilities, each of the coins in this series are struck in .999 fine silver with a face value of 50 Rwandan Francs. The design and finish of the coins are in line with other great bullion products from German mints, creating popularity and demand for these Rwanda Wildlife Series coins.

Rwanda Wildlife Series coins feature the same image on the obverse side each year. In the center of the design is the official seal of the nation of Rwanda. On banners above and below the seal are the engravings “Repubulika Y’u Rwanda” and “Ubumwe-Umurimo-Gukunda-Igihugu.” Surrounding the outer rim of the coin are the engravings of “Banki Nkuru Y’u Rwanda” and “Amafaranga 50 Mirongo Itanu.”

Each of these engravings is inscribed in a native tribal tongue used for centuries by locals in Rwanda. The banner above the seal translates as “Republic of Rwanda,” while below it is the national motto. The inscription along the top rim of the coin identifies the Bank of Rwanda as the issuer of the coin.

The reverse side of the Rwanda Wildlife Series coins each feature a new design on an annual basis. There is a common motif found on the reverse side of all coins. These common design concepts include an outcrop of the entire African continent, complete with geographic features such as flat savannas, mountain ranges, and even the Nile River. Around the outer rim are the engravings “African Ounce” and “1 oz. Fine Silver 999” with the year of issue.

What changes each year is the design on the bottom-left portion of the coin’s obverse. A new set of animals representing the African continent are included. The coins started with the 2008 Rwanda Wildlife Series silver bullion program that featured the gorilla. Available Rwanda Wildlife Series coins include the following designs:

The Rwanda Wildlife Series coins have long been produced in low mintages due to unknown demand for the coins in early production years. The number of coins produced each year has not increased significantly, but the popularity of these coins is one the rise. It is incredibly difficult for investors and collectors to find these coins today, which are available in just a 1 oz. weight and a bullion version.

Rwanda Wildlife Series coins ship to you in one of two packages. If you choose to purchase just one coin, it will ship to you in an individual plastic flip to protect the coin’s current condition. Multiples of 10 are shipped in a plastic-wrapped sheets.

While many investors around the globe are familiar with German sovereign mints such as Geiger Edelmetalle and the Bavarian State Mint, but the BH Mayer Mint is one of the nation’s oldest mints and has developed a variety of high-quality bullion products over the years. BH Mayer was founded in 1871 and is located in Pforzheim, Germany. The mint has produced a variety of numismatic products over the decades, including commemorative coins, medals, legal tender, and other precious metal products.

For those purchasing a Rwanda Silver Wildlife Series coin from Silver.com, you’ll have a number of options to pay for your bullion products. Silver.com proudly accepts Visa and MasterCard credit/debit cards, as well as bank wire transfers, PayPal transfers, and paper checks. Bank wire and PayPal transfers process the quickest, with most processing immediately. Credit cards take an average of one business day to process, while paper checks can take as many as six business days to clear.

Once your payment has processed, your products will be released to our shipping queue for fulfillment. Your Rwanda Wildlife Series silver coins are packaged in discreet boxes and shipped to your home via the United States Postal Service or UPS. Silver.com offers a tiered shipping scale that makes shipping your products affordable. Any order exceeding $3,000 in total includes free standard shipping and insurance. Should your products become lost or stolen during shipping, Silver.com will file an insurance claim on your behalf to secure a refund and/or work with the shipping company to locate your lost products.

If you have any questions for Silver.com, we encourage you to contact one of our associates with your concerns. You can reach us on the phone at 888-989-7223, connect with us online using our website’s live web chat, or submit your questions via email.