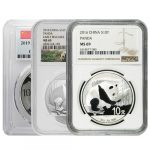 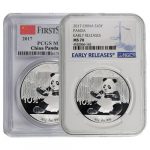 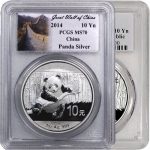 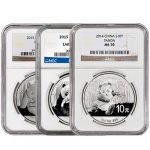 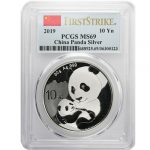 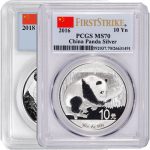 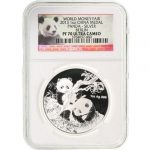 The Chinese word for panda literally means “bear cat.” Admittedly, when observing these playful creatures, it is not hard to see a touch of feline playfulness. These unique animals do more than just captivate imaginations, they also have an important place in Chinese currency and in the coin collections of serious numismatists.

In 1983, the People’s Republic of China started issuing these unique coins, coming out with a new design each year (with a few exceptions). The purity of the metal has also changed since the beginning of the panda series. The first coins were only 90% silver, and later the government upgraded the quality to sterling silver (which is 92.5% silver). The coins for 1989 and beyond have been silver bullion, boasting 99.9% silver.

The Sheldon Scale is the system used for grading the state of coins. The grades range from P1, which signifies a worn out coin that is barely recognizable, to MS70, which describes a perfect uncirculated coin that is basically a work of art. Any new Panda Coin that you buy will be of mint state (MS) quality but is much more likely to fall in the low- to mid-60 points range. On close examination, it will be easy to see minor dings and scratches that occurred from contact. The strike will be acceptable but far from flawless.

The graded Panda Coins that Silver.com sells are all graded in the Mint State spectrum. This means that are practically perfect, boasting strong luster and few contact marks. They come in sealed packaging so you do not have to worry about dinging your new treasure after it ships to you.

Why Collectors Admire The Panda Coin

A Chinese Silver Panda Coin in its original NGC packaging furnishes a guarantee to the purchaser. Basically, it says, “this coin unmarred by handling and protected from the ravages of contact. It is a piece of art in its original form and thus more valuable than its ungraded, unprotected counterparts.”

To illustrate why this grading is so important, take the 1983 Panda Coin as an example. As regular currency, it is worth 10 Yuan, which when converted to US dollars is barely over $1.50. However, only about 10,000 were minted, a fact which in itself heightens their value. An MS69 grade further multiplies the worth; those that have a 1983 Panda have in their hands a treasure worth over $2,500.

Of course, more modern versions of the Panda Coin are not likely to yield such startling increases in value anytime soon. Modern Panda Coins are minted more prolifically than the originals were. They are still valuable as investment pieces, however, and the NGC grading is often a key factor in how much a coin is worth.