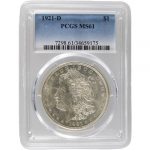 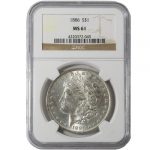 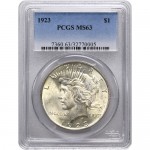 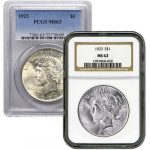 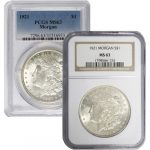 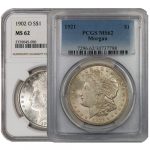 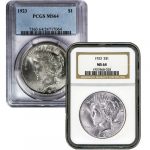 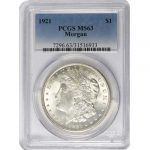 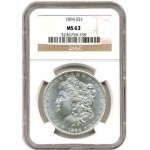 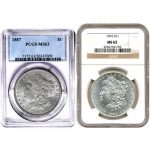 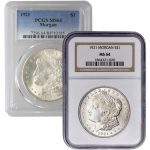 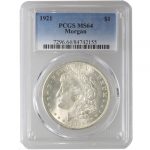 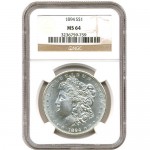 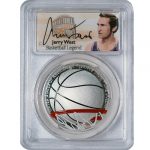 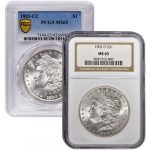 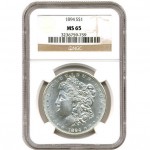 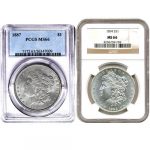 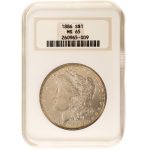 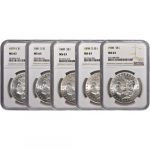 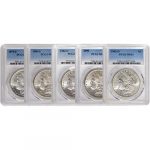 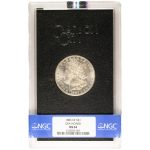 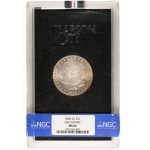 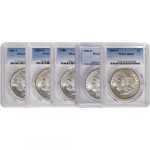 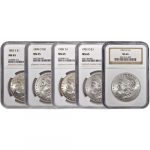 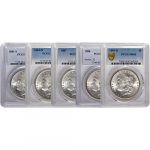 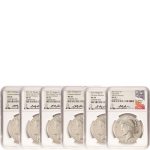 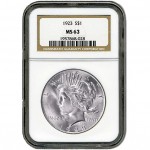 Graded U.S. Silver Dollars are among the most popular silver coins among collectors and investors. Prior to 1965, the U.S. mints used silver in minting coins, a practice that was discontinued due to the dwindling of the country’s supply of silver in the early 1960s. Of all the minted silver coins, two of the most popular are the Morgan Dollar and Peace Dollar.

The Morgan Silver Dollar was created in response to the 1878 Bland-Allison act, which authorized the treasury to purchase a quantity of silver and put it into circulation in the form of silver dollar coins. The Panic of 1873 caused advocates in congress to push for bimetallism, the practice of using both gold and silver as a standard, resulting in passage of Bland-Allison.

The mint director at the time, Henry Linderman, personally chose the designer for the first silver dollars. He chose George Morgan, an assistant engraver at the time, but one who had apprenticed at the Royal Mint in London. Morgan decided to depict Lady Liberty on the coin and pressed the daughter of a friend, Anna Williams, a school teacher, into modeling for him. The first Morgan dollar was minted on March 11, 1878, and presented to President Hayes. The Morgan was minted from 1878 through 1904, and then again in 1921.

The Peace Silver Dollar emerged in 1921 as a tribute to Allied victory in the First World War. The Pittman Act of 1918 required the minting of several million silver dollars. Coin collectors and numismatists successfully lobbied government officials to design a coin commemorating the country’s triumph and ensuing peace. Treasury Secretary Andrew Mellon authorized a contest to design the coin and an aspiring Italian sculptor, Anthony de Francisci ultimately won. The first Peace dollar was issued on December 28, 1921. It featured a Lady Liberty based on the features of the sculptor’s wife, Teresa.

The Morgan Silver Dollar features a profile of the head of Lady Liberty on its obverse side, accompanied by 13 stars to signify the 13 original colonies. The words “E Pluribus Unum” also appear, along with the year of issue. The reverse side shows a flying eagle with an olive branch in its talons along with a bundle of arrows to indicate strength during war. The original design included eight tail feathers on the eagle, but this was later adjusted to seven. Wording on the coin’s reverse includes “In God We Trust,” the face value, mintmark, and country.

The Peace dollar shows a windblown Lady Liberty in profile wearing a crown meant to symbolize a new dawn of peace. The U.S. motto, “In God We Trust,” appears on the obverse side, as well as the word “Liberty” and the year of issue. The reverse side of the coin features an eagle resting against the backdrop of a sunburst, reinforcing the theme of a new dawn of peace. The eagle is clutching a brace of olive branches, another symbol of peace. The words “E Pluribus Unum,” the nation’s name, mintmark, and denomination also appear on the reverse side of the coin.

Silver dollars are priced according to two factors: Their availability and their precious metals content. While many of these coins are still available, their value far exceeds their denomination.

Due to the age and years in circulation, many coins show some signs of wear. These are graded and their condition (fine, very good, or choice) is included in the product specifications. We also offer silver dollars in Mint State condition. These uncirculated coins are graded according to their “mint state” and receive a numerical grade of between MS60 and MS70 depending upon their color, luster, and overall appearance. These types of coins guarantee a high level of quality and authenticity for our customers.

Our inventory varies based on availability, but we offer a wide selection of Mint State Morgan and Peace dollar coins from several years in addition to circulated coins for collectors. U.S. silver dollars are one of the most popular coins on the market today.

Morgan and Peace dollars are not particularly rare or obscure coins as millions were minted each year. There are, however, only a finite number available, and their unique place in United States history adds to their value for collectors. These coins contain 90% silver with a face value of $1.00 (USD).

If you are interested in learning more about our certified Morgan and Peace dollars, or want more information about precious metals in general, please contact our helpful sales staff by phone at our toll-free number 1-888-989-7223. A staff member will be available to answer any question you might have between the hours of 9 a.m. and 6 p.m. Monday through Friday. You can also use our handy online chat feature to talk to an agent and ask questions.