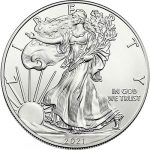 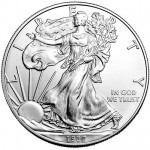 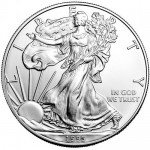 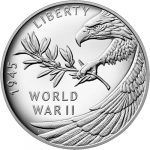 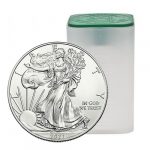 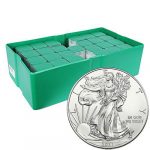 The American Silver Eagle is the official silver bullion coin of the United States. It is certified under the Liberty Coin Act of 1985, and more than 300 million American Silver Eagle coins have been sold to date. If you’re interested in expanding your portfolio to include silver, these coins are one of the safest investment options, because their design is recognized worldwide, and, therefore, they are highly liquid and easy to trade.

To many, silver and other precious metals are a viable investment option because the U.S. economy is still fairly volatile, making the U.S. dollar unpredictable. The value of silver, however, has historically continued to hold its value well despite the economy. It’s also a commodity that is in high demand, because there is a limited supply. If you’re interested in investing in silver, take a look at brilliant uncirculated American Silver Eagles. They’re one of the most popular investment options available to those seeking physical silver.

History of the American Silver Eagle

There are three U.S. mint locations where American Silver Eagles have been produced: the San Francisco Mint, the Philadelphia Mint, and the West Point Mint. The first American Silver Eagles were made at the San Francisco Mint. Now, most silver coins are produced at the West Point Mint. Several special issues of the coin were created, including a bicentennial version in 1993 and a Millennium addition in 2000.

Investors like BU coins over circulated ones because their value is more predictable, and they are easier to trade. However, another deciding factor is that brilliant uncirculated coins come at a discount if you buy in bulk monster boxes.

Design of the American Silver Eagle

American Silver Eagle coins have a classic, yet modern, design. The front features a rendition of Adolph A. Weinman’s 1913 Walking Liberty design that symbolizes freedom. Lady Liberty holds the American flag as she heads toward the rising sun. Inspiration for the design came from the Walking Liberty Half Dollar that was created almost one century earlier. All of the coins have the text, “In God We Trust,” and “Liberty.” They also feature the year they were issued.

The back side of the coin has a heraldic eagle designed by John Mercanti. The eagle appears regal as he clutches a shield against his chest and arrows in his claws — a true symbol of war and peace. There are also 13 stars representing the 13 original states. The text on the back of the coin reads “United States of America,” “One Dollar,” and “1 oz. Fine Silver.”

The 2021 release of the Silver American Eagles from the United States Mint brings the 35th-anniversary celebration of the series, and an important change for the future of the series. Dating back to the 1986 debut of the series, the US Mint has not deviated on its path with the design of the obverse and reverse of the Silver Eagles. However, starting in 2021, a new reverse design element depicting the American bald eagle comes to the series. The US Mint has issued 2021 Silver Eagles to start the calendar year with the original heraldic eagle design from John Mercanti. Mid-2021 sees the new reverse design element take over on all of the coins in the series.

In the new reverse design element, the 2021 Silver Eagle features an American bald eagle in flight. Created by Artistic Infusion Program artist Emily Damstra, the new reverse of the Silver Eagle features an American bald eagle in flight. The bird is swooping downward with its wings flexed behind its frame and its talons clutching a large oak branch. The inscriptions have been rearranged on this side of the coin to accommodate the new design element, but remain the same with “United States of America,” “One Dollar,” “1 oz. Fine Silver,” and “E Pluribus Unum” included. The majority of these inscriptions are around the design rim, but with no banner to place the “E Pluribus Unum” inscription upon, it is now just inside of the design rim within the field beneath the tail feathers of the bird.

Most American Silver Eagles are bullion coins, but some are Proof. Proof coins are rarer and more desirable to collectors. The difference is that the Proof coins were struck twice, giving them a finer detail and shine. Additionally, older coins are worth more money because of their collector value.

American Silver Eagles come in 99.9 percent pure silver in 1 troy oz. However, there are several packaging options, such as 20 coin tubes and 500 coin monster boxes. When buying in bulk, investors often prefer to purchase one of these options as they are both mint-sealed, meaning all the coins contained within them have never been touched by human hands. Tubes and Monster Boxes are also convenient for storing the coins, being easily stacked atop one another and keeping the coins well protected.

American Silver Eagles are one of the most reliable sources of silver because they are certified by the U.S. Mint and widely recognized. That’s why they are a great asset to add to your portfolio. Silver.com offers American Eagle Silver coins at the most competitive prices possible. Ordering is easy and secure and shipping is always inexpensive.

Invest in the Silver American Eagle BU Coins at Silver.com

If you have any questions about these Silver Eagles, please don’t hesitate to ask. Silver.com customer service is here to assist you at 888-989-7223, online through our live chat, and via our email address. Please feel free to visit our Payment Methods page for more details on acceptable payment methods and applicable purchasing minimums/maximums.