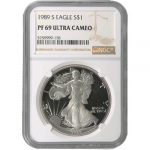 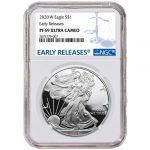 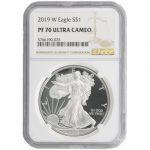 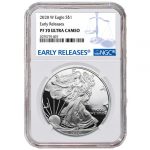 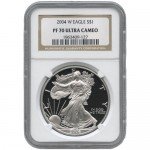 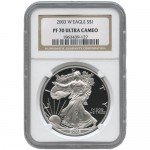 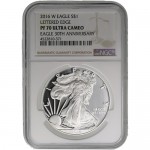 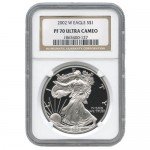 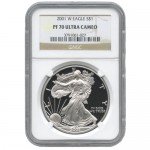 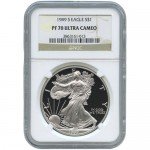 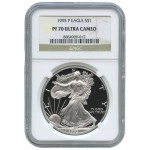 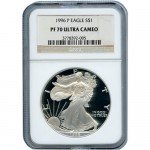 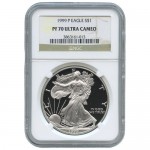 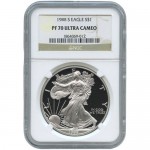 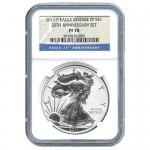 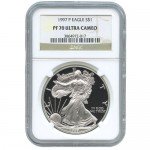 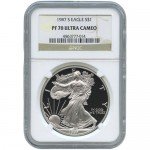 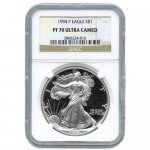 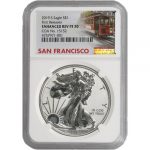 Who is the NGC?

The NGC, or the Numismatic Guaranty Corporation, ensures collector coin quality by grading them on a specific scale. Numismatics at the NGC grade coins by a number of factors including metal condition, surface blemishes, coloration, and detail preservation (such as the lines on Franklin’s Liberty Bell). The NGC is an independent member of the National Collectors Group and works to encourage objectivity and integrity in its grading process. One of its unique methods involves an introductory categorization process that identifies all coins without any labels describing who submitted them. In this way, the identification process remains unbiased.

Silver Eagle Proofs begin as 99.9% pure silver (about as pure a grade as a silver coin can get). The mint polishes both new dies and these blank silver coins specifically for its design cast. Because collectors value deep relief and shining mirrored surfaces, the die will typically strike the blank coin at least twice. This ensures some of the finest detail of any coin to come out of the mint. As detail clarity is a key factor in coin grading, this is an important step.

Proofs have been a part of the Silver Eagle tradition since the beginning, released every year since 1986 except for 2009. A standard proof has a distinctive relief, with the cameo rising above the coin’s surface. Other specialized types of proofs are only released with special anniversary sets. These sets often commemorate one of the national mints or the Silver Eagle Program itself.

An ultra cameo proof has a more dramatic contrast between the surface of the portrait itself and the field surface surrounding it. The depth of each cameo depends on the newness of the die used to cast it. One of the reasons First Release Silver Eagle Proofs are so prized is because they are cast with newly polished dies, resulting in a beautiful deep cameo finish.

In most proof coins, the image carries what collectors call a “frosty” finish, while the field has a shining mirrored surface. Reverse proof coins are, contrary to misconception, not simply coins that are only proofed on “the reverse side.” A reverse proof coin is every bit as valuable as a standard proof. The difference lies in the dynamic between image and field: in a reverse proof, it is the cameo that has the mirrored shine and the field with the frosty finish.

NGC grades coins on a 70-point scale, with 70 being the highest “perfect” score. The most collectible coins, of course, have the highest grade. Certified 68, 69, and 70 Silver Eagles are all bound to catch the eye of an experienced collector, and anything over 60 is in the “uncirculated” category (and therefore highly collectible). One exception to this rule is in the case of mint-made marks. Mint-made marks are typically deemed more acceptable than man-made imperfections and, in fact, a distinctive enough mark may land the Silver Eagle in its own niche “mint error” category.

Investors and collectors alike prefer a certified and graded Silver Eagle over a raw edition. One of the benefits of the NGC grading process is that a graded coin can become certified. Certified coins have a guaranteed authenticity and automatically have a higher value. Raw coins hold a sentimental appeal to collectors who express interest in the history behind their coins, but many others prefer preserved and certified coins for their collections. Investors almost always prefer the certified option, as it provides the lowest risk for them.

The packaging of a silver coin is its encapsulation. NGC includes a unique identifier on each slab that assures the coin’s certification. This certified slab includes a number that the collector can use to look up that specific coin online and confirm its certification. This is another reason investors, dealers, and collectors all seek NGC-certified coins for their collections.