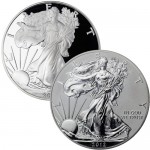 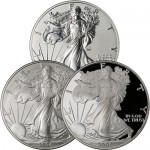 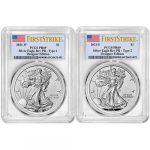 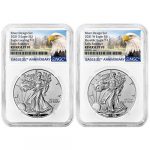 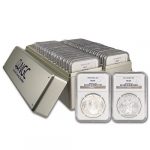 Whether you’re looking for a way to boost your investment portfolio or you simply need an amazing gift for a loved one, Silver American Eagle Coin Sets can be a great option. These sets offer one coin for each year of the collection’s minting. A full set would include 29 total coins, one from each year of the coins’ production. These sets are perfect for beginning or avid collectors and will make an impressive addition to any collection.

Originally released in 1986, the Silver American Eagle Coin set offers investment-grade silver, and is, in fact, the only bullion coin in the country to offer this. On top of offering investment-grade silver, it’s important to note that these coins are the only silver bullion coins in the world backed and guaranteed by the United States Government as having the correct weight, purity, and content.

Originally, the idea to create coins guaranteed by the government came about through plans to sell off some of the country’s silver stockpile. During the 1970s and 80s, when there were sales of the stockpile, the price of silver dropped. This caused problems within the economy, making it difficult for the government to get rid of their excess silver.

After several failed attempts at getting a bill to pass the Senate, finally, in 1985, Senator McClure produced an amendment to the Statue of Liberty-Ellis Island Commemorative Coin Act that allowed for the stockpiled silver to be minted into 1 oz coins and sold by the government, helping minimize the impact on the silver prices and the economy as a whole.

In 2002, Legislatures realized that the original intent and wording of the law was to help get rid of the silver stockpile, which was happening quicker than expected. However, it was proposed that the coins continue being minted. In 2002, The Support of American Eagle Silver Bullion Program Act went into effect, allowing the government to purchase silver on the open market to specifically continue minting these coins for the citizens.

The coins have a long history of being minted all over the country. The first wave of Silver American Eagle Coins was minted in San Francisco from 1986 to 1998. After that, they moved to both Philadelphia and West Point for a year, from 1999-2000. Since 2000, however, these coins have primarily been minted in West Point, though San Francisco produces the coins from time to time.

There were several years where specifically collectible coins were created in this collection. From 2006-2008, and 2011-present, uncirculated Silver American Eagle Coins were produced on burnished blanks in limited quantities.

The downturn of the economy from 2009-2011 was partly to blame for the uncirculated versions of the coins suspension. The recession caused many investors to turn to silver bullion as a way to hedge their bets. Because of this, the United States Mint decided to create only circulated Silver American Eagle Coins through these years, due to the extremely high demand.

In fact, demand got so bad that the Mint decided to create an allocation program to limit the number of bullion coins a person could buy from the government. This allocation program went into effect, once more, in January 2013 due to another instance of extremely high demand.

Currently, the coins are struck in West Point, New York and San Francisco, California by the United States Mint. They are made of 99.9 percent silver, weigh 1 troy ounce each, and carry a face value of $1 each. Because of the purity of the coins, as well as the stability of the minting, these have become extremely popular with serious collectors, investors, and even as gifts for children.

When you purchase a Silver American Eagle Coin set, you know that you’re getting something special. The coins are graded and certified by professional grading companies like the Numismatic Guaranty Corporation (NGC) or the Professional Coin Grading Service (PCGS). On top of that, each certified coin comes in its own plastic container, and the set ships to you in its original slab.

The obverse of these coins features the design of Adolph A. Weinman, depicting a full-length image of Lady Liberty taking a stride. Lady Liberty is shown holding oak and laurel branches in her left hand with her right arm fully extended. On the opposite side, you see an eagle and shield, the eagle holding arrows in its left talon and an olive branch in the right.

Compared to merely purchasing one coin, buying a complete set has more appeal to collectors and usually will sell for a slightly higher premium per coin because of the value and significance of a complete set. Currently Silver.com offers full sets of the American Silver Eagle coin which are available for purchase online.