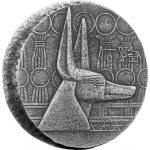 Scottsdale Mint is one of America’s fastest growing private minting facilities, producing a wide range of products in both gold and silver. Among its most popular products are its silver bars, but the mint also strikes its own mint-branded silver rounds and even has contracts with foreign governments to strike foreign reserve coins. The Scottsdale Mint offers an exciting lineup of products that would make the perfect addition to any numismatists portfolio or personal collection.

Although the Scottsdale Mint is not permitted to strike legal tender US coins, it does have working relationships with foreign reserve banks to strike legal tender gold and silver coins for those countries. In 2015, two sovereign coin programs were made available in this domain representing the Republic of Congo and Fiji. Now the mint has landed another contract with a foreign government, launching the all-new Silver Egyptian Relic Coins for the Republic of Chad. Learn more about these exciting new Five Troy ounce coins, the Republic of Chad, and the Scottsdale Mint below.

Meet the Republic of Chad

Human populations first moved into the Chadian basin in significant numbers beginning in the 7th millennium BC. By the conclusion of the 1st millennium BC, at which point in time the Egyptian Empire was a significant power, a series of states and empires had risen and fallen in the nation of Chad. Fast forward to 1920 and the French had conquered the region and incorporated it into the French Equatorial Africa colony, where it stayed until independence in 1960.

Today, the Republic of Chad is the fifth-largest country in African by land area, and is bordered by a total of six different nations, including Libya to the north, Sudan to the east, the Central African Republic to the south, Cameroon and Nigeria in the southwest, and Niger in the west. The nation is named after Lake Chad, which provides the largest wetland environment in the country and the second largest in Africa.

As the latest addition to the lineup of sovereign coins from the Scottsdale Mint, the Silver Egyptian Relic Series features designs inspired by real-life hieroglyphs from Ancient Egypt. These symbols offered some of the earliest and most complete forms of written human communication, helping modern humans connect with civilizations that rose and fell long before our own.

The series is scheduled to feature several releases with new designs representing a different facet of Ancient Egypt. Each of the coins will have some shared characteristics that bind the program together. Chief among these is the metal content, weight, purity, mintage, and physical appearance of the coins.

Each of the Silver Egyptian Relic Series Coins includes Five Troy ounces of .999 fine silver, bears a face value of 3,000 Francs, and features a truly distinct appearance. The coins are rimless, with an outer edge that is thick and resembles that of chiseled stone or granite. All designs are incuse in nature, meaning they are set into the surface of the coin rather than engraved on top of the design field. Lastly, an antique finish is hand-brushed onto the coins to give them the true appearance of an ancient relic.

The coin series debuts with the 2016 5 oz Silver Republic of Chad Egyptian Relic King Tut coins. Known as the Boy King, King Tut took over as the 12th pharaoh of the 18th dynasty in Egypt in 1332 BC, and ruled until 1323 BC. His nine-year reign was largely unnoticed in the grand scheme of the Ancient Egyptian Empire

Tut ascended to the throne following the death of his father, but at the age of just 10 years old, several advisors assisted him in the day-to-day operations of the empire. Tut would eventually die at the age of 19, his nine-year reign fading into obscurity until 1922 when his tomb was discovered with an intact, solid-gold coffin containing his mummified remains. Tut is best known for a controversial death and lackluster rule.

However, many historians note that Tut reversed many of the radical changes his father had forced the empire through, bringing it back to a more traditional base in just a few years. It was originally believed that Tut died as a result of a vicious attack given the damage noted on his mummified skull, but it has since been surmised that this damage occurred during the mummification process when he was already dead. Modern scholars suggest a broken leg actually led to an infection that killed the Boy King.

On the obverse side of the 2016 5 oz Silver Republic of Chad Egyptian Relic King Tut coin you’ll find the image of King Tut in a right-profile portrait. This design is lifted from actual hieroglyphics depicting the life of the young rule.

The reverse of all 2016 King Tut coins features the national coat of arms for the Republic of Chad. A former French colony, engravings on this face include the words “Republique du Tchad,” “3,000 Francs CFA,” and the national motto of “Unite, Travail, Progres” on a ribbon below the coat of arms.

About the Scottsdale Mint

Located in Scottsdale, Arizona, the Scottsdale Mint has a vast array of silver and gold products available for purchase. Scottsdale Mint products range from their own branded silver rounds and stacker silver bars to the production of foreign bullion and commemorative coinage. For example, the Scottsdale Mint strikes the Silver Congo Silverback Gorilla Coin series. This all-new series debuted in 2015 and is planned for annual releases with a new obverse gorilla design each year. Alternatively, the Scottsdale Silver Round series is a unique stacker product that features three different weights, all of which are compatible with one another and easily stacked together, regardless of weight and size courtesy of uniform shapes and interlocking, 3D designs.

When you purchase Silver Egyptian Relic Coins on Silver.com, you’ll find a number of payment methods available to complete your transaction. We accept all major credit and debit cards, as well as paper checks, Pay Pal transfers, and bank wire transfers. Credit and debit cards have a maximum purchase of $5,000 and generally take one business day to process.

If you have any further questions about Scottsdale Mint Silver products, please don’t hesitate to ask Silver.com. Our associates are available on the phone at 888-989-7223, or you can connect with us online using our live web chat and email features. And be sure to check back with Silver.com as future releases in the Silver Egyptian Relic Series are unveiled!