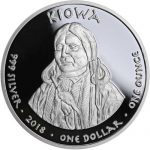 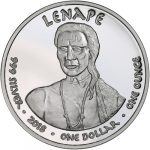 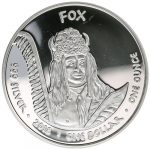 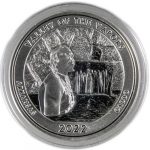 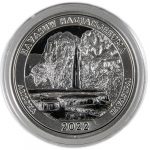 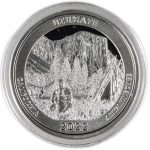 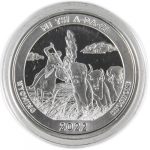 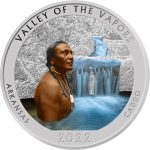 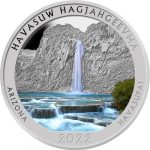 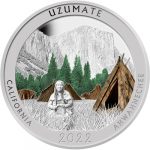 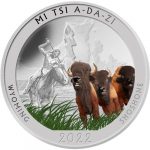 Today, the Native American Mint of Torrance, California is broadening its production lineup into both bullion and proof coinage that celebrates accurate cultural depictions representing tribes from across North America. Currently on Silver.com you’ll find the first-ever silver bullion coin from the Native American Mint, as well as all currently available coins from its Native Dollars silver proof coin series. Learn all about these exciting new precious metal products on this page.

Investment-grade bullion rounds are commonplace from private mints across the United States, but there is no other product in the country that can match the Silver Sioux Buffalo Bullion coin. These bullion coins are issued a face value of One Dollar by the Native American Mint with the authorization of the Oglala Sioux. This makes the Silver Sioux Buffalo Bullion coin the only American silver bullion coin available in the precious metals marketplace that is not from the United States Mint or authorized by the US federal government.

Nevertheless, the coin’s status as the only silver bullion coin struck in America not by the US Mint adds to its immense collectability. For the record, federally-recognized Native American tribes in the United States exist as “domestic dependent nations,” which offers a form of parallel sovereignty to the tribes within the Constitution of the United States of America.

Each of the Silver Sioux Buffalo Bullion coins available from Silver.com include the following features:

On the obverse face of the coin you’ll find the front-facing portrait of a Sioux chieftain. Engravings on this face include the terms “Sioux” and “Sovereign Nation” above the design set, with “One Dollar .999 Silver One Ounce 2015” featured along the bottom. The Oglala Sioux, or Oglala Lakota as the tribe prefers, are one of the seven sub-tribes of the Lakota People, within the Great Sioux Nation. Individually, the tribe is considered the largest single tribe within the Sioux nation. The majority of its members live on the Pine Ridge Indian Reservation in South Dakota, the eighth-largest Native American reservation in the US.

The reverse face of the coin depicts the creature that served as the lifeblood of the Oglala Lakota and the Great Sioux Nation as a whole. The buffalo is North America’s largest land mammal, and its migratory patterns across the Great Plains were followed by various Sioux tribes as they depended upon the creatures for food, clothing, shelter (hides), and even tools (bones). Engravings on this face includes “Sioux Buffalo” and “America.”

Increasing the variety and number of Native American Mint silver coins is the Silver Proof Native Dollars Series. Each of the coins in the series has a face value assigned as One Dollar, and consists of one troy ounce of .999 fine silver. The coins each have a common reverse design theme that features an animal representative of the state and tribe on the obverse, with common engravings that identify the animal and state, the Jamul Sovereign Nation of California (operating the mint), and the word “America” at the bottom.

Like the Silver Sioux Buffalo Bullion coin, these proof coins have no official legal tender status in the United States. Though struck by the Native American Mint in representation of a sovereign Native American tribe, the coins are still restricted by federal law which prohibits any entity by the federal government and United States Mint to authorize and produce official legal tender American coins.

Nevertheless, the scope of the Native Dollars Series is sure to prove impressive to collectors. To date, the series consists of a total of seven coins representing some of the largest and most well-known tribes in North America. Specific details shared by all coins in the series include the following:

The first coin released in the series was the 2015 Silver Alaska Eskimo Polar Bear coin. On the obverse face of the coin is a depiction of an Eskimo family in traditional clothing that kept them warm in the face of the brutal weather of Alaska and the Arctic Circle. Like other tribal nations, Eskimo is actually a broader name that applies to various smaller tribes. Eskimo indigenous people are found historically from eastern Siberia in Russia, across Alaska and Canada, to Greenland. The largest of these tribal groups are the Inuit of Canada, Northern Alaska, and Greenland, and the Yupik of Siberia and Western Alaska.

On the reverse of this coin you’ll find the image of a polar bear adult guiding its young cub along the polar ice caps. The polar bear is found in ranges throughout the Arctic Circle, both on the Russian and North American continent. The whole of the animal was used by the Eskimo people for food, clothing, and other purposes. For example, fat from the blubber was used as oil in lighting and warming homes.

Following the successful release of the first proof silver coin in the Native Dollar Series, the Native American Mint has released six subsequent designs into 2016. These designs, to date, include the following animals and tribes:

About the Native American Mint

The Native American Mint is located in Torrance, California. A private entity overseen by the Jamul Sovereign Nation, a federally recognized tribe of Kumeyaay peoples, the goal of the Native American Mint is to “offer research, design, and minting expertise to help tribes in this field.” Proceeds from the sale of all Native Dollar Series coins goes to help the individual tribes through royalties collected from each sale.

As you choose the silver coins from the Native American Mint you wish to purchase from Silver.com, you’ll find a variety of payment methods available to help you complete your purchase. Credit and debit cards are popular, with all major cards accepted. The average processing time is one business day.

Silver.com also accepts paper checks, with an average four to six business days to process, and a maximum purchase of $50,000 enticing many to use this option. PayPal and bank wire transfers are an increasingly popular choice because they offer the highest available maximum purchase values and immediate processing, which allows your products to be released to our shipping queue for fulfillment.

Silver.com offers a tiered shipping scale that is determined by your total purchase amount. Products over $3,000 in total ship for free with standard shipping and free insurance. Should your package from Silver.com, shipped by the United States Postal Service or UPS, fail to arrive or be stolen at the destination, Silver.com will work to right the situation. We’ll work with the carrier to attempt to recover lost articles or initiate an insurance claim on your behalf to recover your financial investment.

If you have any questions, please feel free to contact Silver.com on the phone at 888-989-7223. You can also connect with us online by using our live web chat or email features.