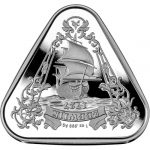 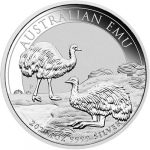 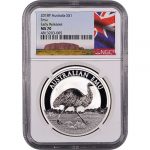 The Perth Mint of Western Australia is well known to investors and collectors for the production of stunning coin collections. Among its most popular are the annual releases such as the Silver Australian Kookaburra, the Silver Australian Koala, and the Silver Australian Kangaroo, the latter of which was the first-ever .9999 fine silver bullion coin in its annual-release cycle. Outside of these annual issues, the Perth Mint offers a variety of one-time coins to mark special occasions and limited-run series that highlight Australia’s native flora and fauna, as one example. Below, you can read a little more about the unusual and limited-issue silver bullion coins from Perth Mint.

Introduced in 2016, the Perth Mint offered two different low-mintage silver coin collections featuring the images of Norse Gods and Goddesses. The Silver Norse Gods were offered in 2016 and the Silver Norse Goddesses were issued in 2017. In both cases, the coins were 2 Troy oz blanks that had high-relief design strikes and an antique polish that gave the coins the appearance of ancient currency. Additionally, the coins were rimless blanks, enhancing the old-world appeal of the products. A notable difference in the two series is the silver purity. The 2016 Norse Gods coins have .999 fine silver, while the 2017 Norse Goddesses have .9999 fine silver.

Each of the Silver Norse Gods and Goddesses coins did share some other features:

The designs available in the collection included the following:

A recent series introduced by the Perth Mint, the Silver Marvel Series debuted with a 2017 coin featuring the image of Spiderman. The six-coin collection features the original comic book images of some of the most popular Marvel Universe superheroes. From the pages of comics to the big screen, these characters are now offered on a collection of limited-issue silver bullion coins as well.

Each of the six designs in this collection comes with a limited mintage of only 50,000 coins and shares the following features:

The six superheroes featured in this release have enjoyed appearances in individual feature films in the Marvel Cinematic Universe, as well as parts in the wider Avengers franchise. The available designs in this collection include:

One of the more exciting recent issues from Perth Mint is the Silver Wedge Tail Eagle coins. This program was launched in 2014 with impressive reverse designs from John Mercanti, the former Chief Engraver of the United States Mint from 2006 to 2010. Mercanti’s career at the US Mint stretched from the 1970s to 2010 when he retired and included work on the reverse design of the Silver American Eagle.

The Silver Wedge Tail Eagle Coins have gone through various designs on the reverse. The 2014 and 2015 date marks shared a design, the 2016 and 2017 coins shared a design, and the 2018 and 2019 coins have each had their own unique design. From 2014 to 2019, there were six issues of the coins and four different designs. Each one captures the largest predatory bird on the Australian continent in a different relief, from flying through the sky to resting in their nest.

On the obverse of the Silver Australian Wedge Tail Eagle Coins, there are two different effigies of Queen Elizabeth II. The 2014-2018 coins have Ian Rank-Broadley’s effigy of Elizabeth II. The 2019 coins debuted the new sixth-generation Australian design from Jody Clark, the first since 1966 to include the Queen’s neckline and shoulders.

The Perth Mint is famous for its silver coin collections featuring native animal species from the Australian continent. The Silver Kookaburra introduced this phenomenon to investors and collectors in 1990, and it continued in the 21st century with the Silver Koala in 2007, the Silver Wedge Tail Eagle in 2014, and the Silver Kangaroo in 2016. The latest coin to join this series of wildlife-themed coins from Perth is the Silver Australian Emu.

Introduced in 2018, the 1 oz silver coins in the Silver Australian Emu Series follow some of the popular concepts the Perth Mint employs in other collections. The coins are available with .9999 fine silver content in BU condition. Each one has a face value of $1 (AUD) backed by the federal government of Australia and comes in individual or bulk options.

The Silver Australian Emu coins are offered inside of acrylic capsules, sealed rolls of 20 coins, or boxes of 100 coins. Like other popular Perth Mint releases, the Silver Emu coins have new designs on the reverse each year with a limited mintage of only 30,000 coins. Available issues to date include:

Perth introduced another new wildlife-themed collection in 2018 focused on the Birds of Paradise. With 42 species spread across 15 genera, the birds of paradise are members of the family Paradisaeidae and the majority of the creatures are found in eastern Indonesia, Papua New Guinea, and eastern Australia. Each of the members of this family are known for the plumage found on the males that include elongated, elaborate feathers extending from the beak, wings, tail, or head, depending on the particular species.

The Birds of Paradise Series launched in 2018 with Victoria’s Riflebird. Each of the designs in the series is available in silver bullion and gold bullion. The individual silver releases are limited to a mintage of 50,000 coins per design and feature 1 Troy oz of .9999 fine silver content. The coins are available for purchase in protective plastic capsules, tubes of 20, or boxes of 100 coins. Available designs in the series include:

In 2019, the Perth Mint switched the obverse design away from Ian Rank-Broadley’s fourth-generation Royal Mint of England portrait of Queen Elizabeth II. In an adapted version of Jody Clark’s fifth-generation British currency design of Her Majesty, the Perth Mint debuted the sixth effigy of the Queen to display on Australian coins. Starting in 2019, most major Perth Mint silver bullion coins will feature this Clark-inspired design of the Queen in right-profile relief with her neckline and shoulders visible. This is the first portrait of the Queen to include these features on an Australian coin since 1966.

Also released in 2019 was the first proof Silver Bird of Paradise coin. The Perth Mint kept the release schedule the same and started the collectible options with Victoria’s Riflebird. The designs on the reverse is the exact same as the 2018 bullion release, but the obverse of the 2019 Proof Bird of Paradise coin does use the Jody Clark sixth-generation design.

The proof coins are offered in beautiful display cases with fully colorized shippers that include a depiction of the bird featured on the coin. The coins have a limited mintage of just 2,500 per design and come with a numbered Certificate of Authenticity.

In addition to the coins mentioned above, the Perth Mint offers one-time releases that mark commemorative moments from Australian and world history. Examples of these releases include:

One of the most recent colorized proof silver coins from the Perth Mint is The Simpsons series of coins. The five-coin character collection celebrates the more than three-decade run of the cartoon family on American television. The Simpsons launched in 1987 as 30-second shorts featured on The Tracey Ullman Show and ran for three seasons, giving Americans their first taste of the iconic, dysfunctional family of yellow cartoon characters. The new series of colorized silver proof coins are issued on behalf of Tuvalu.

Each of the coins issued in the series has 1 Troy oz of .9999 fine silver content and a limited mintage of 5,000 coins per design release. Individual coins in the series are housed inside of clear acrylic cases that enable you to see the designs on both the obverse and reverse within the protective packaging. The coin cases are housed inside of protective shipper boxes that include artwork depicting all of the characters from The Simpsons. The coins also come with individually numbered Certificates of Authenticity. Available designs include:

The coins in this series all share the same obverse design. Ian Rank-Broadley’s fourth-generation portrait of Queen Elizabeth II. Broadley created this design for the Royal Mint of England in 1998 and features on the obverse of various Commonwealth nations to this day. The colorized reverse proof designs in this collection are used with the permission of THE SIMPSONS and 2019 Twentieth Century Fox Film Corporation. All Rights Reserved.

If you have any questions about the silver for sale from Perth Mint at Silver.com, you can reach out to our customer service team. You can call us on the phone at 888-989-7223, chat with us live online, or simply send us an email with your inquiries.