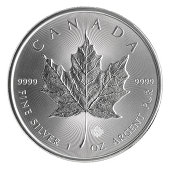 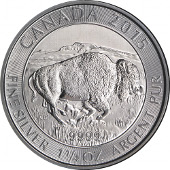 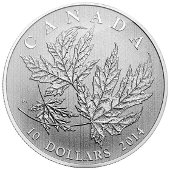 Silver Royal Canadian Mint coins are known for their creativity, beauty, and value. So who’s the force behind these treasures? Formed in 1908, the Royal Canadian Mint (RCM) manufactures all the circulation coins of Canada. Below, we explain more about the RCM and its history, offering a detailed description of a few of its most successful series of coins.

What Does The RCM Do?

In addition to producing the Canadian circulation coins, the RCM manufactures collector coins, medals, tokens, and medallions. The RCM also provides services to businesses and other countries, such as precious metal storage, assay laboratory services, gold and silver refinery services, and foreign coin production. RCM is a Crown Corporation, so the Canadian government is its 100 percent owner and lone shareholder, but that doesn’t mean handouts. Much like the U.S. Post Office, the RCM operates without taxpayer support and thus stays afloat through its own revenue.

History of the RCM

Before the RCM, Canada’s coins were struck in London at the Royal Mint itself. Canada’s up-and-coming status as a nation prompted it to think about getting its own coinage, and it subsequently opened a Royal Mint branch in Ottawa. The Winnipeg facility, opened in 1976, came about to allow the Ottawa facility to focus on collector coins while it handled the manufacture of foreign and circulation coins.

The RCM is known for its wide selection of precious metal bullion and coins. They tend to produce coins commemorating Canada’s national heritage such as animal species, national symbols, historical figures and Canadian landmarks. With .9999 purity, Canadian silver coins are purer than other silver currencies. Each coin typically consists of one troy ounce of .9999 pure silver that’s guaranteed and backed by Canada’s government.

One of the world’s leading silver bullion coins, the Silver Maple Leaf was introduced in 1988 by the Royal Canadian Mint. The mint introduced the bullion coins with only a One Troy ounce weight available. The coin was introduced at the same time as the platinum bullion version of the Maple Leaf and the silver coin was the first ever released with .9999 fine silver. Today, it remains one of the only annual-issue bullion coins with .9999 fine silver content. Each coin has a face value of $5 (CAD) backed by the federal government of Canada. The coins offer the following design elements:

Starting in 2014, the Royal Canadian Mint began to introduce security features on its leading silver bullion coin to ensure the bullion it offers is protected from counterfeiting. The first element added to the coins was a set of radial lines. These radial lines reflect light hitting the coin’s surface in unique ways to make it more difficult to produce counterfeit versions of the Silver Canadian Maple Leaf. The next security feature added to the coins was a laser micro-engraved privy mark. The privy mark is present only on the reverse of the coins and includes the final two digits of each date mark, but those digits are visible only under magnification.

Though not a security feature in manner, the Royal Canadian Mint introduced another feature to its silver bullion coins in 2018. MINTSHIELD technology is applied only to silver bullion coins and is designed to help prevent “white spots” or “milky spots” that tend to occur only on silver coins. The origins of these minor visual flaws are not precisely known, but do have a detracting impact on the value of the silver bullion.

The Royal Canadian Mint Wildlife Silver Coins are some of the scarcest and most sought after in the bullion world. The RCM released mintages of just one million of each of the six different Wildlife Series designs, and many of those one million are either out in circulation or set aside for private use. The low mintage increases demand and value in this way. The RCM released the six designs two per year from 2011 to 2013. The Timber Wolf and Grizzly arrived in 2011; the Cougar and Moose arrived in 2012; and the Pronghorn Antelope and Wood Bison arrived in 2013. 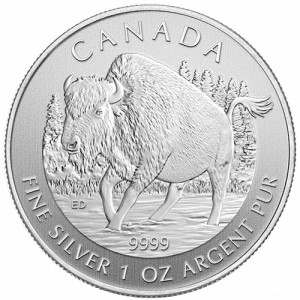 Coins in the RCM Wildlife Series all draw their inspiration from Canada’s natural landscape and native fauna. The coins are available in brilliant, uncirculated condition through sites like Silver.com.

After the impressive success of the Canadian Wildlife Series, the Royal Canadian Mint brought the animals of the collection to the reverse of Silver Canadian Maple Leaf coins as privy marks. The Wild Canada Series followed the same release pattern of the Canadian Wildlife Collection, offering two privy mark Silver Maple Leafs each year between 2016 and 2018. Each coin contains 1 Troy oz of .9999 fine silver in BU condition with a mintage figure of 50,000 coins per design release.

On the reverse of each coin is the Silver Canadian Maple Leaf’s sugar maple leaf design from Walter Ott. The sugar maple leaf is accompanied by inscriptions of “Canada,” “9999,” and “Fine Silver 1 oz Argent Pur.” The collection’s six privy marks include the following date marks and images:

The obverse of the coins includes Susanna Blunt’s fourth-generation effigy of Queen Elizabeth II. Her Majesty is the ceremonial head of Canada and is depicted in right-profile relief on the obverse of Canadian coins. This image is the first of a British monarch on Canadian coins since the reign of Elizabeth II’s father to depict a ruler without a crown.

Each one of the coins is a reverse proof specimen. Reverse proof coins have strong, frosted background fields with mirrored design elements.

Inspired by the success of the Wildlife Series, the RCM has just released the first of four .9999 pure silver coins from a new Canadian Birds of Prey Series. The releases are bi-annual for two years, so the RCM will release a total of four coins by the end of 2015.
Artist Emily Damstra created the first edition of the series, the Peregrine Falcon. Canadians have celebrated the majestic falcon since medieval times because of its beauty and agility in the skies. The 1 oz coin features Queen Elizabeth II in profile on one side (artist Susanna Blunt created the image) and an image of a falcon hunting with its wings spread and talons out on the other side. The Falcon coin has a mintage of just 20,000. 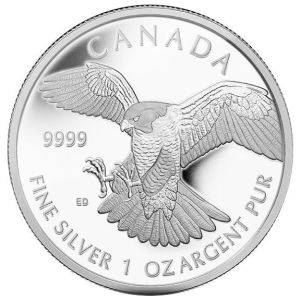 The Royal Canadian Mint continued the Silver Birds of Prey Series in 2014 and into 2015 with the release of the following designs after the Peregrine Falcon debut:

Following the success of the Birds of Prey silver bullion collection issued in 2014-2015, the four coins of the release returned in 2016 as a reverse proof collection. The Birds of Prey Reverse Proof coins have the exact same reverse designs from the original collection, with different mintage figures offered and beautiful visual appeal. The series release followed the same schedule as the original, with the following designs available in order:

These coins are each available as reverse proof coins, meaning the coins have frosted background fields with mirrored design elements overlaying the field.

Sold for face value, this series of commemorative coins began in 2011 with the Maple Leaf coin and a mintage of 200,000. The coin sold out so quickly that it prompted the RCM to up the mintage of the next seven coins to 250,000. Since the series’ first edition year, the RCM has issued four $20 for $20 silver coins per year. Themes of coins issued in the past include that of a polar bear, farewell to the penny, Santa Claus, a goose, and a bobcat. The RCM has reduced the mintages to 225,000 again, so these coins sell out quickly and can be hard to come by. 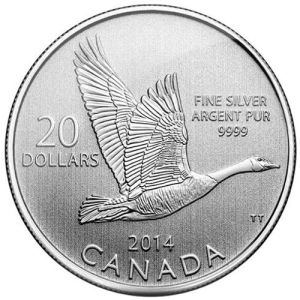 In fact, the $20 for $20 coins are so popular that the RCM limits purchases to three per household in Canada and the U.S. The one-troy-ounce .9999 pure silver coins come encased in hard plastic and include an assay to verify their authenticity. The $20 for $20 series is ongoing and continues to sell out; the RCM hasn’t specified a termination date yet.

The Royal Canadian Mint is one of the most respected in the world for its commitment to making products with 99.99 percent silver purity to ensure top quality and value. Additionally, the artistry of Canadian silver coins is exceptional, and you would do your coin collection or investment portfolio a favor by purchasing one of these precious coins.

Most of the RCM’s bullion coins are available in tubes of 25 coins which have remained sealed since they left the mint’s facility. Their commemorative or proof coins often come in individualized packaging with a COA. Be sure to browse Silver.com’s wide selection of RCM silver coins today and take advantage of our everyday low prices!

When you are ready to purchase silver from the Royal Canadian Mint, our customer service team is available to help answer any of your questions. Please feel free to call us at 888-989-7223, chat with us live online, or simply send us an email with your inquiries. For quick answers to common questions regarding payment, please visit our Payment Methods page.