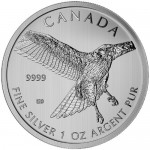 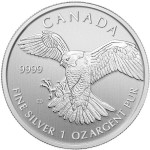 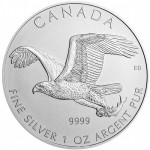 The Birds of Prey series of coins is a well-designed collection that capitalizes on the Royal Canadian Mint’s success with a similar series, the Canadian Wildlife Series. The collection consists of four coins, and the Mint intends to release two coins a year for 2014 and 2015.

The coins are unique in a number of ways, beginning with their minting itself. The fact that they come from the Royal Canadian Mint is a huge draw for investors and numismatists alike. The mint is one of just a few that guarantees a high purity in its coins. For instance, the four coins in the Birds of Prey series are 99.99 percent pure. This in itself is important for those who want to invest in silver or collect one-of-a-kind pieces. Whether they collect or resell, they’re assured of high value.

Timeline of Initiation and Reasons for Creation

The Birds of Prey series is a current and ongoing collection the Royal Canadian Mint announced in February of 2014. It follows the success of another wildlife-based series, and is actually joined by a Call of the Wild Series, which consists of gold bullion. However, the Birds of Prey series is entirely silver. It’ll consist of four different coins; one is available now. The other three will come out bi-annually. The mint will release one more coin in 2014 and two more will follow throughout 2015.

There are several reasons for the creation of the series; although, a lot of it has to do with the RCM’s success with former wildlife coins. The coins also celebrate important aspects of Canadian history and culture, which are two aspects that increase their overall appeal as collectibles. Due to their artistic nature and editions, they’re not only collector’s items but also extremely wise investments.

These Canadian birds are prominently displayed in a stunning design that shows the bird’s wings outstretched and its claws stretched as it reaches to grab its prey. The etching on the feathers is finely done, and the finer details on the face, beak, and talons are painstaking. The front of the coin also features several stamps of authenticity, including proof that it contains one ounce of silver and has a .9999 purity rating. Both the Falcon and the Bald Eagle feature the work of Canadian illustrator Emily Damstra.

On the reverse, the coin features a profile image of Queen Elizabeth II. This likeness is also beautifully rendered, with regal lines and careful details. That side of the coin features the Queen’s name, the year of the minting, and the coin’s face value, which is $5 Canadian. Artist Susanna Blunt is responsible for rendering the Queen’s image.

The Peregrine Falcon and Bald Eagle coins are available on their own or, from some sellers, they’re available in a tube that generally consists of 25 coins. The cost of the coins varies depending on the supplier, but are typically in line with other RCM coins. Some suppliers offer the coin in different color palettes.

The other two coins in the series aren’t known yet. Interested numismatists and investors know only that they’ll feature other birds of prey. The anticipation may well make them that much more collectible.

All of the coins in the Birds of Prey series are true limited editions, making them highly sought after among collectors and people who enjoy investing in silver. Similar series offer editions in the millions, but the Royal Canadian Mint has something different in mind with this series. It’s truly limited, making it imperative for collectors to pay attention to release dates.

As mentioned, the series will have four editions. The Peregrine Falcon is the very first, but reports vary regarding the actual mintage. For example, the falcon initially had a limited mint consisting of 20,000 coins. However, since that time, the RCM has released more of the falcon edition.

Some sources maintain that only one million coins total will see release, which would mean there will only be 250,000 pieces of each edition. However, most sources agree that each of the four coins in the series will see a mintage of one million pieces. In total, if true, that should equal out to four million coins. That being said, the coins are only available through suppliers and other bullion channels.