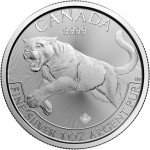 The Royal Canadian Mint has a history of producing some of the most sought-after silver and gold bullion coin programs in the world. It started in 1979 with the introduction of the Gold Canadian Maple Leaf, and continues today with a variety of wildlife-themed programs that offer the most popular designs. For the numismatists in search of something new to purchase in 2016, the Royal Canadian Mint doesn’t fail to deliver with its all-new Silver Canadian Predator Series of coins, available now on Silver.com.

Silver Canadian Predator coins were recently introduced at the World Money Fair in Berlin, Germany on February 5, 2016. The all-new series from RCM launches with a cougar design and will eventually feature a total of four coins with stunning .9999 fine silver content and a face value backed by the government of Canada. Learn more about these exciting new coins in following passages, and click-on to purchase your very own 2016 Silver Canadian Predator Cougar Coin.

The present state of the Silver Canadian Predator Series owes its existence to the immense popularity of two wildlife-themed coins series introduced by the Royal Canadian Mint since 2011. First came the Canadian Wildlife Series, a program of silver bullion coins with .9999 fine silver and designs inspired by some of the nation’s most prevalent wild residents. The cougar, the face of the new Silver Canadian Predator Series, was featured in that six-coin series.

Immediately following the Silver Canadian Wildlife Series (2011-2013), was the four-coin Birds of Prey Series that featured aerial predators that are also commonly found across the Canadian wilderness. Launched in 2014 and concluded a year later in 2015, this series followed the two-coin release schedule of the Wildlife Series, with February and August releases of new designs.

What remains unknown about the Silver Canadian Predator Series is the release schedule of the coins and the other animals to be featured in the series. The RCM didn’t release future designs in its previous wildlife-themed coins, but did follow a two-coin release schedule for each program that is likely to continue with the Predator Series.

Emily Damstra has a long history with the Royal Canadian Mint. The nature illustrator and Canadian artist first worked with the RCM on the final two designs in the Silver Canadian Wildlife Series in 2013, and designed all four coins released in the Birds of Prey series in 2014/2015. Damstra designed the 2016 Silver Canadian Predator Cougar coin, and is set to complete the three future designs, as well.

The cougar is the fourth-largest cat species in the world, and is one of the Western Hemisphere’s deadliest predators. You won’t know that a cougar is stalking you in most cases until you are attacked. Once found roaming the entire continental United States and Canada, the western reaches of both countries are the common home territories of cougars today. Known by other names such as the mountain lion and Puma throughout the hemisphere, the cougar continues to strike fear in the heart of ranchers and outdoor enthusiasts everywhere.

Damstra created an inspiring depiction of the cougar for use on the 2016 Silver Canadian Predator Cougar coin. On the obverse you’ll find the design dominated by the full-length figure of one of these muscular and powerful beasts. The cougar is featured lunging at its prey, with its mouth open and its claws ready to capture an unsuspecting creature.

Engravings on this face of the coin are standard from the Royal Canadian Mint, and include “Canada” at the very top, followed by “9999” immediately below. Along the bottom edge of the design field you’ll find “Fine Silver 1 oz Argent Pur,” as well as Damstra’s “ED” initials. Like all new bullion coins from the RCM, these coins feature enhanced security features.

The Royal Canadian Mint rolled out two major anti-counterfeit enhancements to its coins in 2014, which have now matriculated to all major coin programs from the mint. Radial lines are visible on both sides of the Silver Canadian Predator coins, and the maple leaf privy with year of issue mark is visible on the reverse. The maple leaf privy features a series of shrinking maple leafs, with the year of issue engraved in the very center. That year of issue mark is micro-laser engraved, making it hard to replicate and only visible under magnification.

The second coin released in the series is the 2017 Silver Lynx coin. A medium-sized predatory cat, you’ll find the lynx throughout the North American continent stretching across Canada and down into the continental United States. The primary range for the cats includes the boreal forests of Canada and the US state of Alaska, but it can also be found in the lower-48 states that stretch across the US-Canada border from Washington and Idaho through Minnesota and into the Northeastern US.

On the reverse of 2017 Silver Canadian Predator Lynx Coins is the image of the elusive cat. Lynx are not as easily spotted in the wild as other predatory cats. Solitary nocturnal animals, the lynx spends most of its active time during the day hunting by ambush at night. This design features the lynx as it moves to attack its prey.

One of the most popular wild species to feature on Canadian bullion coins is the wolf. The 2018 Silver Canadian Predator Wolf coins mark the third release in the four-coin collection. Known in scientific circles as the Canis lupus, the wolf includes a variety of subspecies on both the North American continent and in Eurasia. In North America, the gray wolf is most common in the northern United States and Canada, while the red wolf is common in the southeastern US.

The reverse of the 2018 Silver Canadian Predator Wolf coins features the large predatory canine species running after its prey. Though the wolf on this coin is depicted chasing unseen prey alone, wolves are actually pack animals. Wolves will do most of their hunting in groups, a tactic that allows the beasts to take down larger prey such as moose and even bears because they can outnumber and wear down the target.

Silver Canadian Predator Coins are available to purchase individually or in bulk. All coins are originally packaged by the Royal Canadian Mint inside of individual plastic flips, mint tubes of 10 to 25 coins, or Monster Boxes containing a maximum of 500 coins.

The Royal Canadian Mint was founded in 1908 to process and refine precious metals discovered in the Yukon Territories in 1899. The original facility was located in the federal capital of Ottawa, and a 1980 expansion of the mint saw capacity increase with the addition of a Winnipeg location. Throughout its history, the Royal Canadian Mint has been a benchmark by which other sovereign and private mints measure themselves.

Achievements of the Royal Canadian Mint include striking gold bars to repay British debts from World War I, the production of the first 99.999% pure gold coins, the one-time highest face value gold coin in history, and even Olympic gold, silver, and bronze medals for both the Calgary and Vancouver Winter Games.

When you complete your purchase of Silver Canadian Predator Series coins on Silver.com, you’ll have numerous options to pay for your products. Silver.com accepts traditional payment methods such as debit/credit cards, with a minimum purchase of $0 and maximum of $5,000. We also accept paper checks, which have the benefit of a $0 minimum, higher maximum of $50,000, and 4% savings relative to credit/debit purchases.

Our latest offering includes the acceptance of Pay Pal and bank wire fund transfers. PayPal has no minimum and a maximum of $10,000 pre transaction. Bank wires have a minimum purchase of  $2,500 and a maximum of $150,000. Both payment methods offer instant processing. The instant processing of these payment forms allows us to release your products to our shipping queue sooner, making it easier to fulfill your request and ship it to you faster.

Silver.com offers a tiered scale for shipping costs that is dependent upon the amount of your total purchase today. Orders from $0 to $2,999 have flat-rate shipping $5.95.

Best of all for bulk purchasers, any order in excess of $3,000 qualifies for free shipping and insurance on your products. Packages are sent via UPS Next Day Air, when possible, and include free insurance to protect you against loss, damage, and theft. Even if you do not meet this higher purchase level, you always have the option of upgrading to expedited shipping for an additional fee.

In the event that your package is lost, Silver.com will work with the carrier to try and locate your package. Whenever possible, Silver.com will work to provide you with a replacement product should your original order get lost or suffer damage during transit. Please note that many gold and silver precious metal products are in high demand today, and if sold out we are not able to provide you with a replacement.

In this event, Silver.com will launch an insurance claim on your behalf to secure a refund of your money so you are not left without the hard-earned money you invested in the precious metals industry.

If you have any questions about the new Silver Canadian Predator Cougar Coins, Silver.com payment methods, or shipping processes, please don’t hesitate to ask. A Silver.com associate is standing by to help you at 888-989-7223, or you’ll find us online using our live web chat and email features.