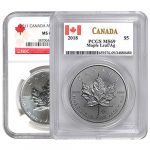 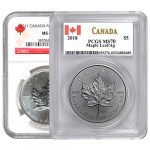 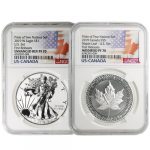 Coins from the Royal Canadian Mint are known for their beautiful designs and their fine quality silver. Both experienced and new investors in silver bullion will want to add Canadian Certified Silver Coins to their collections, and Silver.com offers an array of Canadian coins for purchase.

The 1 oz Canadian Silver Maple Leaf is the most popular and recognizable Canadian silver bullion coin. They’re worth five Canadian dollars and are legal tender in Canada, though their worth as investments and for collectors changes based on the current price of silver. The front features Queen Elizabeth II in a profile depiction designed by artist Susanna Blunt. The back of the coin features the famous maple leaf design, as well as the .9999 purity of the silver.

Another collectible coin series currently produced by the Royal Canadian Mint is the Birds of Prey series. Production began in 2014, and the first design in the series is the Peregrine Falcon, depicted in flight on the back of the coin. Like the Maple Leaf, they’re 1 oz and 99.99 percent pure silver, and depict the same beautiful image of Queen Elizabeth II on the obverse.

From 2011 to 2013, the Royal Canadian Mint manufactured the collectible Wildlife Series. The mint produced six coin designs, each depicting a picture of one of Canada’s wild animals on its reverse, such as the wood bison, the grizzly bear, and the timber wolf.

The Royal Canadian Mint is known among coin collectors and silver bullion investors as a mint of impeccable quality. Many of its coin designs have won awards for design, quality, and popularity. Since 1985, The Royal Canadian Mint has produced coins that take home titles such as Coin of the Year, Most Artistic Coin, and Most Historically Significant Coin.

The Importance of Coin Grading and Certification

Unfortunately, the Silver Maple Leaf is a popular counterfeit coin because of its purity, recognizability, and value. Smart investors and collectors like to see a certification of grade and authenticity when purchasing these coins.

Coin grading and certification has a long history, beginning in the early 20th century. Coin collecting became popular, and dealers used a system of three classifications (good, fine, and uncirculated) to grade coins because of the differentiation between dealers and the need for a single standard. Two companies are known and respected among collectors as providing the best grading and certification: the Professional Coin Grading Service (PCGS) and the Numismatic Guaranty Corporation (NGC).

PCGS and NGC offer a standard of grading accepted among investors and collectors, without any of the potential for differing opinions that private dealers might have, which can severely affect the value of a coin. Investors prefer coins to be certified and graded by one of these two companies, not only because it protects against counterfeiting, but because the grading provides investors the best opportunity to see the value of a coin on the marketplace.

Coins make a popular silver investment, because they’re easy to store, and their small size needs only a small investment of money to start. Canadian coins are known for their purity, making them a favorite with silver bullion investors. The Royal Canadian Mint has a long history, meaning that investors and collectors also purchase old coins because of their rarity, offering the distinct investment options of investing directly in fine silver, or investing in the coins themselves because of their grade, design, and age. Add Canadian Silver Coins to any collection today by searching Silver.com’ wide selection and purchasing investments with unique beauty and creative designs.