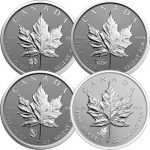 The official silver bullion coin of Canada is one of the most recognizable precious metal products in the world. Struck to demand specifications and featuring .9999 pure silver, the annual Silver Maple Leaf coin from the Royal Canadian Mint is one among the most prized possessions of investors and collectors alike. On a number of occasions, the mint has produced the nation’s official bullion coin in limited-edition privy mark designs. Each of these privy mark coins are one-time productions, and feature unique additions to the prized Silver Canadian Maple Leaf Coin.

What are Privy Marks?

A privy mark on a silver or gold coin is a small engraving of a chosen image that is set on the otherwise unchanged reverse or obverse side of a popular coin program. In the case of the Silver Canadian Maple Leaf coin, all those produced with a privy mark feature the included privy design on the reverse side of the coin. With few exceptions, these privy marks are always placed to the bottom left of the Silver Canadian Maple Leaf coin’s iconic sugar maple leaf design.

The Royal Canadian Mint is one that holds the distinction for achieving a number of firsts in the world of precious metals production. In 1979, the Royal Canadian Mint introduced the new Maple Leaf sovereign bullion coin into the marketplace as the first major bullion coni program to rival the South African Krugerrand, which at that time was the only widely available bullion coin in the world.

Almost a decade later, when precious metal coin production was surging around the globe, the Royal Canadian Mint added the Silver Canadian Maple Leaf to the popular coin program. Since that time, the mint has produced the Silver Maple Leaf on an annual basis in bullion and proof versions, with a variety of one-time special strikings in gilded or colorized finishes for collectors.

The Royal Canadian Mint wasted no time adopting the popular Gold Maple Leaf design for use on its new silver program. The Silver Maple Leaf features the same design concepts on the reverse and obverse side of the coin that are found on the gold variant.

On the reverse side of the coin is the national emblem of Canada, the sugar maple leaf. It is featured as one leaf, with engravings that include “Canada” above the design, the purity of the coin (.9999) on the left and right of the leaf, and the phrase “Fine Silver 1 oz. Argent Pur” below. The obverse side of each coin features the right-profile portrait of Queen Elizabeth II as designed by Susanna Blunt in 2003. It is the third-generation depiction of the Queen featured on RCM coins.

As of 2015, two new security features are included in the design of all Silver Maple Leaf coins. First, a series of micro-laser engraved radial lines are visible on the reverse and obverse sides of the coin to deter counterfeiting activities. To further enhance its security, a small maple leaf privy has been added to the bottom right on the reverse side that contains within it an image of the year of issue, which is only visible under magnification.

An ongoing theme within this anniversaries edition of Privy Silver Maple Leaf coins were landmarks of the world. The London Tower Bridge, Brandenburg Gate, Leaning Tower of Pisa, and the Titanic were all celebrated with a privy mark on the Silver Maple Leaf coin in the 21st century, with each struck between 2009 and 2012.

A recent example of this collection is the 100th Anniversary of Einstein’s Theory of Relativity Privy Silver Maple Leaf coin. Available in a 1 oz weight with the standard .9999 pure silver and $5 (CAD) face value, this maple leaf featured a special “E=MC2” privy mark alongside the maple leaf on the reverse side.

The longest running, singular program of Privy Silver Maple Leaf coins is the Zodiac series. Now in its second production run, the original coins in this Privy Silver Maple Leaf series were produced between 1998 and 2009. The program started with the Year of the Tiger privy mark on Silver Canadian Maple Leaf coins in 1998, and concluded with the Year of the Ox privy mark on the 2009 version of the coin. All of these coins were designed by Walter Ott and the Royal Canadian Mint engravers, with the coins limited to a mintage of 25,000 at maximum.

A new program of Zodiac-inspired Privy Silver Maple Leaf coins was introduced in 2012 to mark the Year of the Dragon. This program continues to this date, featuring Year of the Snake, Year of the Horse, and Year of the Goat designs. Each animal on the 12-year cycle of the Zodiac is featured with a special privy mark on the reverse face, right alongside the sugar maple leaf design. Mintage for these coins started at 25,000 maximum, but was increased to roughly 85,000 in total due to demand.

An upcoming Wild Canada Series of Privy Silver Maple Leaf coins will be introduced two designs at a time over the course of three years. The Wild Canada Series of coins features privy marks honoring the Canadian Wildlife Series. Although it has already been honored with privy marks on the Silver Maple Leaf, these coins are different in that they feature a reverse proof finish, which means the design set has a mirror-like appearance and the background field is strong and frosted.

Silver.com proudly accepts a variety of forms of payment for your purchase of Privy Silver Maple Leaf coins. We accept Visa and MasterCard credit/debit cards, with an average processing time of one business day. Bank wire and PayPal fund transfers are also accepted by Silver.com, and often process immediately. Paper checks are also accepted by Silver.com, and though they take up to six business days to process, they also come with the highest maximum purchase so you can secure as many Privy Silver Maple Leaf coins as possible in one purchase.

Those paying by paper check and bank wire transfer enjoy the added benefit of a 4% discount on the purchase price. Once your payment has processed, we’ll release your products to the fulfillment center. All Silver.com shipments are packaged in discreet boxes to protect the identity of your coins during shipping.

Silver.com offers an affordable scale for shipping costs that is determined by your total purchase price. Any purchase in excess of $3,000 is eligible for free standard shipping and insurance. All packages are shipped via the United States Postal Service or UPS. If your shipment is lost during delivery, we’ll work with your carrier to recover the products. If this is not possible, we’ll initiate an insurance claim on your behalf to secure a refund of your purchase price.

If you have any questions, please don’t hesitate to contact Silver.com associates. We’re available on the phone at 888-989-7223, online using our website’s live web chat feature, or by submitting your questions to us in an email.