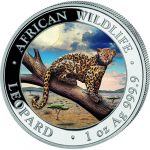 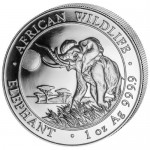 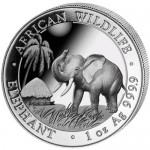 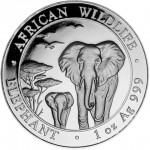 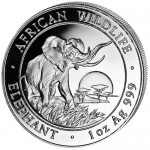 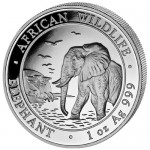 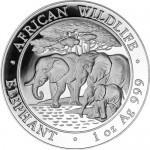 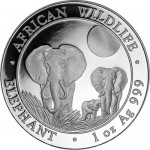 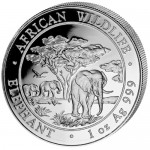 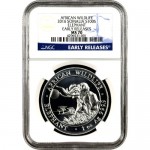 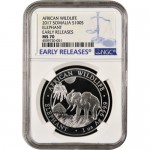 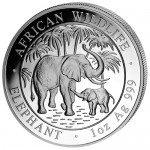 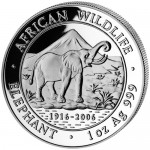 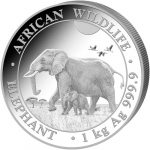 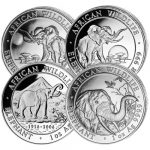 The nation of Somalia is responsible for minting the popular Silver Somalian Elephant 1 oz .999 bullion coin. The origins of Somalian Silver Coins are shrouded in mystery. It’s commonly believed that the Republic of Somalia commissioned the Bavarian State Mint of Germany to create the annually released African Wildlife Series coins. This mint possesses such a letter, but it is uncertain whether the authorizing official, Babatunde Bobulobolou, was ever a real person. Many skeptics do not believe that the war-ravaged African nation would have ever had the resources to commission such a spectacular coin series, so the letter has been largely accepted as a forgery.

Another letter from Governor Bashir Issa from the Central Bank of Somalia vehemently denies that the African Wildlife Series coins have any standing as legal tender. However, his authority has also been questioned as he has not governed Somalia’s bank for at least four decades. For this reason, some suggest this letter may be another fake. Some suggest that the Bavarian State Mint may have simply taken it upon themselves to create the coins, and that attributing them to Somalia was a random decision. If this were true, the coins would simply be decorative silver rounds and not legal tender.

The Bavarian State Mint was founded in 1158, which makes it Munich’s oldest minting company. It is one of five state mints in Germany and an acclaimed producer of medals, seals, and collector coins.

There is just one series of Somalian silver coins, the African Wildlife Series. Despite its name, the coins in this series feature just one example of the continent’s wildlife, the elephant. For this reason, they are sometimes known as Somalian Silver Elephant Coins. One coin design has been released every year since the series’ inception in 1999.

The majority of coins in the African Wildlife Series are struck from 1 troy oz of 99.9 percent fine silver. They carry a face value of 100 shillings, however, if the coins are not legal tender, as rumored, this face value is simply for show. A 1 kg version is also available with a 2000 shillings face value.

The obverse side of each coin features an illustration of an elephant or elephant families in the wild. Previous designs have featured a wrinkled bull elephant standing in the long grass, a mother elephant helping her calf stand, and a trumpeting elephant standing on the shores of a lake. The series’ title “African Wildlife,” the animal name “Elephant,” and the coin’s purity and weight are also printed on this side.

The reverse side of each coin features the Somalian Coat of Arms, which shows a pair of leopards holding a shield decorated with the five-pointed star of the Somalian flag. The crest is surrounded by a border of text which denotes the coin’s year of mintage, its denomination, and its country of origin: “Somali Republic.”

Somalian silver coins are sold uncirculated in a range of quantities. Single units are sold in protective packets. Quantities of 20 come packaged in original mint tubes for their protection. Customers who order 500 or more Somalian silver coins receive their coins in a sealed monster box. Four-coin proof collector sets are also available. The large 1 kg silver elephant coins are sold in silver-colored pouches.

Between 3,000 and 5,000 uncirculated and proof 1 oz Somalian silver coins are minted each year. The number of 1 kg elephant coins produced varies according to demand.

Despite their questionable origins, the quality of Somalian silver coins cannot be disputed as they are crafted from 99.9 percent fine silver, the same fineness used for American Silver Eagles, Mexican Libertads, and other coveted collectibles. While the coins may or may not be legal tender, their production by the Bavarian State Mint ensures that their quality can be verified. In many cases, this is supported by a certificate of authenticity.

Some rare 1 oz Somalian silver coins are finished to proof standards. Coins of this caliber are double struck for crisper details than most uncirculated coins. They are then polished to a shiny mirror sheen.

Silver.com proudly stocks a range of Somalian silver coins from the African Wildlife Series, in single quantities, tube quantities, and monster boxes. Silver.com buys these coins directly from the Bavarian State Mint of Germany and inspects all incoming inventory to ensure it’s authentic and delivered as described. If you would like to learn more about Somalian Silver Coins, don’t hesitate to call us toll-free at 1-888-989-7223 or use our live web chat function.