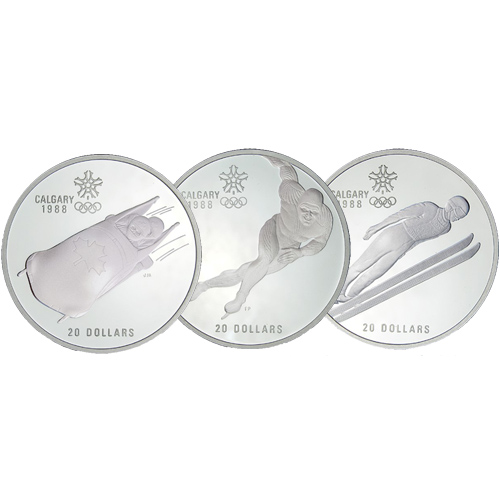 In 1985, the Canadian government announced a plan for a 10-coin series of proof silver coins for sale to commemorate the upcoming 1988 Winter Olympics hosted in the city of Calgary, Alberta, Canada. These coins were the first $20 denomination Olympic commemoratives from the Royal Canadian Mint and the first silver coins in Canada to feature edge lettering. Right now, Silver Canadian $20 Olympic Coins are available to purchase online at Silver.com.

Each Silver Canadian $20 Olympic Coin offered in this listing at Silver.com comes with a plastic flip. The coins are proof specimens that boast frosted visuals over mirrored fields. The coins in the 1988 Winter Olympics collection were issued with one Troy ounce of sterling silver content, or .925 silver. While the obverse of all coins is the same, the reverse features various designs of Olympic athletes to celebrate the many sports represented in the Winter Olympics.

Silver.com offers these coins at random with no guarantee in advance of the specific date and design you’ll receive. All specimens are chosen after your payment clears. Please bear in mind that this means you may get coins with matching designs or various different designs if you purchase several.

The 1988 Winter Olympics commemorative series of proof silver coins was the first in Canadian history to feature edge lettering. Though some coins slipped through production without receiving the edge lettering, most have the phrase “XV Olympic Winter Games – Jeux D’Olympiques D’Hiver” on the edge.

The obverse of each Silver Canadian $20 Olympic Games Coin available here comes with a right-profile portrait of Queen Elizabeth II. Just the second effigy of Her Majesty to feature on Canadian coins during her reign, this design comes with simple inscriptions of the nation of issue, date of issue, the Queen’s name, and a maple leaf.

On the reverse of Silver Canadian Olympic Games Coins is a depiction of an athlete from one of 10 different major sports at the games. The designs were released between 1985 and 1987, with two releases each in 1985 and 1987, and six designs issued in 1986.

If you have any questions, please feel free to ask. Silver.com customer service is available at 888-989-7223, online using our live chat, and through our email address.