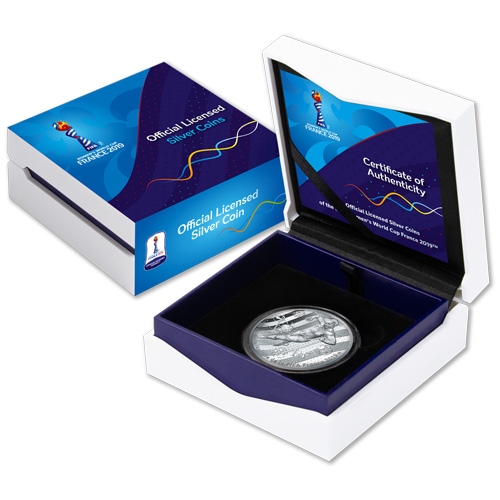 PLEASE NOTE: COINS ARE NOT INCLUDED IN THIS LISTING. COINS MUST BE PURCHASED SEPARATELY.

Football, or soccer, is the most popular global sport with billions of fans across all six habitable continents of the globe. The summer of 2019 brings the buzz of football’s biggest event with the FIFA Women’s World Cup taking place in France from June 7, 2019 to July 7, 2019. The Paris Mint offers commemorative silver coins for sale to mark the event and offers separate display boxes for those collecting the coins. The 2019 Silver FIFA Women’s World Cup France Coin Display Box is currently available to you for purchase online at Silver.com.

As the 2019 tournament gets underway, the United States enters as the defending champion and the winningest nation so far with three titles. The United States won in 1991, on home soil in 1999, and most recently at the 2015 Women’s World Cup in Canada. France is the third nation in Europe to host the games, and the second in the last three. German hosted in 2011 and Sweden hosted the second tournament in 1995.

These 2019 Silver FIFA Women’s World Cup France Coin Display Boxes are intended for use with one coin at a time from the proof silver bullion range. The Paris Mint issued four different proof silver coins with .7137 Troy ounces of actual silver content and a face value of 10 Euros. The coins share a common obverse design of the FIFA Women’s World Cup trophy alongside the flags of the victorious nations to date.

On the reverse of the four different coins are unique images. There is one each representing a goalkeeper, a trick play, a volley, and a player dribbling.