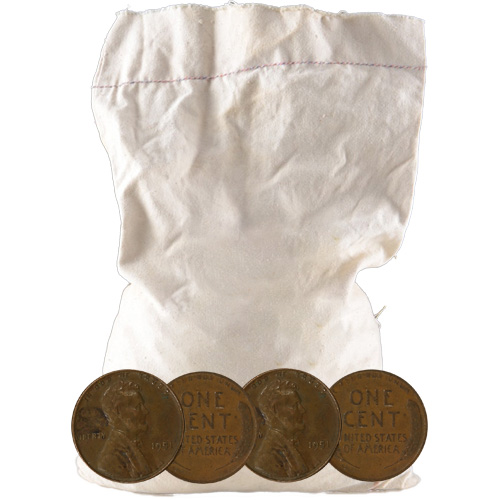 There are many ways for metals investors to get their hands on the products they want in their collection or investment portfolio. With copper proving to be a popular metal in the 21st century, copper rounds and bars are growing in prominence. However, there are other ways to invest in copper. Now you can purchase Wheat Pennies from US circulation inside of a 1 Pound bag of mixed pennies at Silver.com.

The history of the penny in the United States dates back to the very founding of the United States Mint. The mint was authorized by Congress in 1792 and the first pennies were struck by the mint one year later in 1793. Those original copper pennies contained 100% copper content, a purity level that persisted until 1859 when the US Mint downgraded copper to 95% purity.

Over time, the US Mint has used countless different designs on the penny. The obverse design of President Abraham Lincoln is the longest-running single design in American history, but the reverse face features a variety of different designs dating back to 1793. From 1909 to 1958, that reverse design included wheat stalks that led to the naming of the coin among the populace as Wheat Pennies.

On the obverse of these Wheat Pennies is Victor David Brennan’s right-profile bust of President Abraham Lincoln. The 16th President of the United States of America, Lincoln’s portrait has been on the penny’s obverse since 1909. While that’s longer than President George Washington’s effigy on the US quarter, the quarter’s obverse and reverse designs have been the same since their 1932 introduction of Washington’s effigy.

In this product listing at Silver.com, you can purchase a One Pound Bag of Wheat Pennies. Most of the coins contain 95% copper content. The primary exception are 1943 steel cents that included steel content with a zinc-clad layer. Copper and tin were redirected to the war effort during the 1940s and the US Mint was authorized starting in 1943 to adjust copper content in the coins.