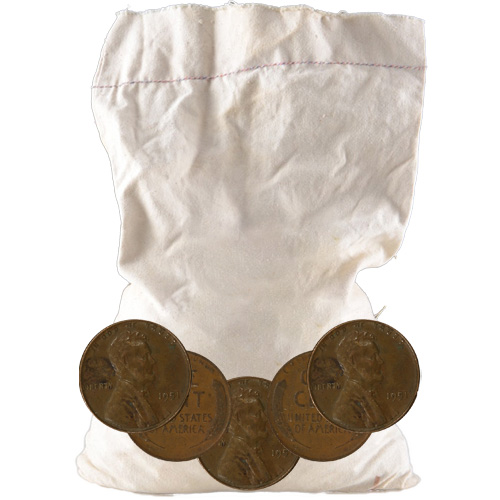 Former circulation coins from the United States Mint offer a unique option for those looking to invest in precious metals. While former silver dollars and gold coinage are popular options, copper pennies offer yet another option for investors looking to diversify. Today, Wheat Pennies are available to you online in 5 Pound bags at Silver.com.

The United States has issued pennies since the founding of the United States Mint, with the first copper coins issued in 1793. Since that time, pennies have been struck by the US Mint with varying designs on both the obverse and reverse sides of the coins. The longest-running coin design in the collection features Abraham Lincoln on the obverse and wheat stalks on the reverse.

All of these Wheat Pennies are available to ship to you inside of a plastic labeled bag with a total of five pounds of copper pennies. Initially, pennies from the United States Mint included a total of 100% copper per coin. As of the mid-1850s, the coins were produced with just 95% copper instead and a mixture of zinc and tin.

On the obverse side of Wheat Pennies is the image of President Abraham Lincoln. Created by Victor David Brennan, this design of Lincoln was the first of any president to appear on a widely circulating coin. The right-profile portrait was unveiled in 1909 for the penny and the reverse included a “VDB” initial strike that many Americans did not like.

Wheat Pennies were issued by the United States Mint from 1909 to 1958. The most common dates remaining today come from the 1940s and 1950s, so your 5 Pound Bag of Wheat Pennies is most likely to include date marks from these two decades.

Please feel free to reach out to Silver.com with any questions. You can call us at 888-989-7223, chat with us live online, or simply send us an email.