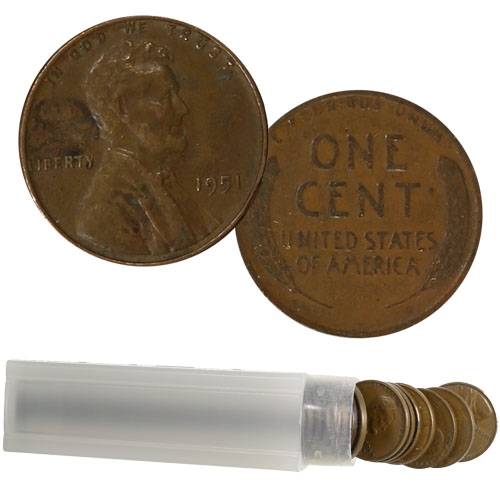 There are many ways for investors to purchase precious metals that offer a hedge against market fluctuations. While gold and silver are popular options, both come with high premiums. Copper, though classified as a commodity, is another popular metallic option and it comes with impressive variety. If you find copper bullion too expensive, historic US coins may be a good option for you. Right now, Wheat Pennies in 50 Count Rolls are available to purchase online at Silver.com.

In this Silver.com listing, you have the chance to invest in copper pennies previously used in circulation in the United States. The Wheat Penny design was available from the United States Mint between 1909 and 1958, with Abraham Lincoln on the obverse and two wheat stalks on the reverse, which resulted in the common naming of the coins.

This product listing offers you a 50-count roll of Wheat Pennies inside of a tube. Additionally, this is a common date listing. This means that you’ll receive a random selection of date marks in the bag, but you are most likely to find common date marks on those coins. This includes date marks mostly from the 1940s and 1950s, the final period of production and one of the highest coining ranges in the series.

On the obverse of all Wheat Pennies is the effigy of President Abraham Lincoln. The Commander-in-Chief of the United States during the Civil War, he is highly regarded as the president who preserved the Union forged nearly a century earlier by President Washington and other Founding Fathers.

The reverse side of Wheat Pennies bears a simple design that gave the coins their name. The denomination of the coin, “One Cent,” is engraved in the center with two curved wheat stalks flanking the images. This side of the coins previously featured the “VDB” initials in 1909, but those were promptly removed. Brennan’s initials reappeared on Wheat Pennies in 1918, but this time on the obverse near the shoulders of Lincoln in the portrait.

If you have any questions about these copper coins, please feel free to reach out to Silver.com. You can call us at 888-989-7223, chat with us live online, or simply send us an email with your inquiries.