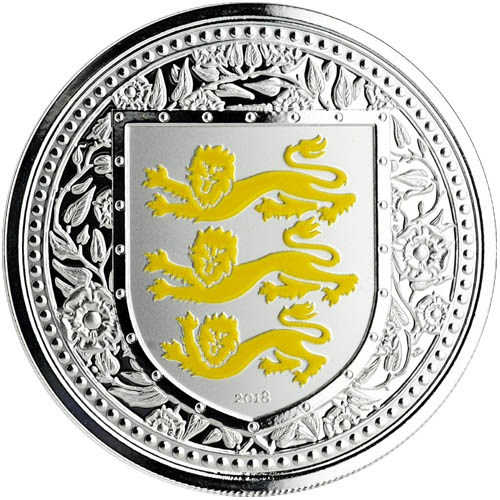 The Scottsdale Mint is out with an exciting new series of silver for sale. In a first major release for the British Overseas Territory of Gibraltar, this collection includes seven coins in all with six silver coins and one gold coin available through Silver.com. Right now, 2018 1 oz British Silver Royal Arms of England Gibraltar Reverse Proof Coins with yellow colorization are available to purchase online at Silver.com.

The reverse proof finish of the coins indicates the presence of strong, frosted background fields with a beautiful contrast between the background and the deeply-mirrored, clear design elements. This unique issue has a yellow colorized lacquer on the Three Lions of the shield in the Royal Arms of England on the reverse.

On the obverse of 2018 1 oz British Silver Royal Arms of England Gibraltar Reverse Proof Coins is the right-profile portrait of Queen Elizabeth II. Her Majesty wears the Royal Diadem crown in this third-generation design created for the Royal Mint of England in 1984 by Raphael Maklouf.

King Richard I, or Richard the Lionheart, was just the second king in the House of Plantagenet following his father King Henry II’s ascension to the throne in 1154. Richard I’s Royal Arms of England would be used unchanged for 200 years after his reign and it became synonymous with the King of England.