Copper bullion is a relatively new form of base metal investment, and we are proud to offer copper bars, rounds, and replica bullet pieces. 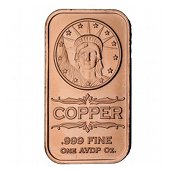 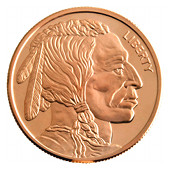 Copper comes from the Latin word “cuprum” meaning “from Cypress.” Copper has been essential to man for thousands of years and in fact was the first metal used in any quantity by man. Interestingly, one of the prior ages or stages of man — the “bronze” age, was named after bronze which is a copper alloy. Copper has made important contributions to civilizations since the Sumerians, and it continues to play a key role in our lives today.

Man’s knowledge of copper is said to date back at least six thousand years. The Sumerians and Chaldeans of Mesopotamia were likely the first to use copper and became experts in the fabrication of the metal. The skill and craftsmanship in copper fabrication eventually spread to the river dwelling people of Egypt. Here, the art continued for thousands of years. Some of the first items fabricated from the metal include jugs, saucers and drinking vessels, as well as tools like razors, chisels and harpoons.

The Evolution Of Copper

The uses and applications of copper and its alloys have changed dramatically throughout history. While some of the original uses are still in effect today, new technologies have opened up many other applications for this versatile metal. In fact, copper is second only to silver in terms of electrical conductivity. Because of this, copper today is widely used in various types of wiring. Copper has been used in coins such as the American penny. In addition, the metal is widely used in jewelry and piping. The uses of copper are actually quite far-reaching. Think about this for a moment: The average car today contains about .9 miles worth of copper wiring weighing up to 99 lbs!

Copper prices have fluctuated throughout history. Looking at some more recent price history, the last twenty five years copper has seen relatively stable prices. Going back to 1990, copper traded as low as about $.60 per lb. to about $1.50 per lb. The copper market then staged an upside breakout in 2005 eventually rising all the way to the $4.62 area in April, 2011. The price has since retreated from that high, and appears for now to be comfortable in the $3.00-$3.50 per lb. range.

Copper Bullion As An Investment

Copper is not only used in industry, but is also bought and traded as an investment vehicle. One of the interesting things about copper is the fact that it is so widely used and needed in industry. When people think of investing in bullion, gold is usually the first thing that comes to mind. Gold, however, does not have the industrial uses that copper does. Volatility in gold prices seems to be historically speaking, significantly higher than that of copper. This could be attributed to the fact that copper may have a more consistent demand stream based on its industrial applications.

For those looking to own “hard-assets” like metals and bullion, copper may potentially be a good choice for those looking for something with potentially less volatility than the yellow metal. While there are different ways and vehicles one can use to invest in copper, owning physical bullion is one of the simplest ways to accomplish the goal.

For someone looking to invest in physical copper bullion, one has many choices at his or her disposal. One can purchase copper bullion bars or copper bullion rounds. Today there are even copper replica bullets available. Here we will look at some of the differences between these products.

Copper bars are fabricated by various mints and come in a few sizes. One ounce bars are very common while ½ lb and 1 lb bars are seen, as well. In addition, one can purchase copper bars in 1 gram size as well as 10 gram. Copper bars are .999 percent pure most of the time. Copper bullion bars carry reasonable premiums over the spot copper price and price-wise fall in between rounds and bullets with bars costing more than rounds but being less expensive than copper bullets.

Copper rounds offer investors a simple way to diversify their precious metals holdings. Copper bullion rounds are .999 percent fine and the 1 ounce size is typically the standard. These rounds are produced by various mints and come in many different designs. Copper rounds tend to be more on the collectable side, yet they carry a relatively small premium over the spot copper price.