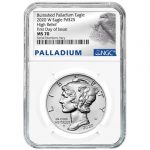 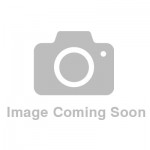 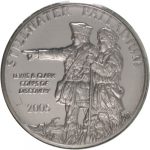 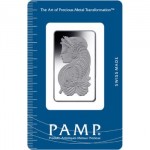 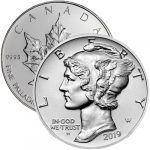 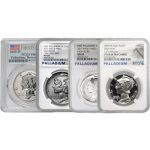 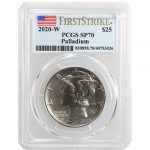 With all of the fuss over the rising prices of silver and gold in the 21st century, other precious metals have largely flown under the radar of investors and collectors. Palladium is not commonly known by all precious metal bar and coin enthusiasts, but its value and purity make it an excellent option for those looking to diversify beyond just gold and silver products.

Palladium is a valuable precious metal that is part of the platinum metals group. It was first discovered in 1803 by William Hyde Wollaston. When Wollaston brought his new discovery to local precious metal dealers in the SOHO neighborhood of London, he was accused of trying to pass off platinum as a new metal. In reality, he had made a legitimate discovery of a different precious metal in the same group. So, why the confusion?

Like platinum, palladium is a silvery-white precious metal that belongs to the same group 10 in the periodic table. There are differences between palladium and platinum that are important though. For starters, palladium has an atypical configuration of electrons in its outermost shell, especially compared to the other members of the platinum metal group.

As a separate metal in the group, palladium is an exceptional precious metal for use in coins and bars because of its flexibility. It is the least dense of the metals in its group, and has the lowest melting point. When palladium is heat treated, it is soft and ductile. When it is cold-worked, palladium experiences increased strength and hardness as a result. Palladium is also resistant to oxygen at normal temperatures, which means coins and bars will not tarnish when exposed to the air.

Why Invest in Palladium?

Palladium has never enjoyed the popularity and widespread demand of gold and silver, but in the latter decades of the 20th century there were palladium bars and coins available to investors interested in the metal. However, when prices for palladium skyrocketed in the early 21st century, most investors cashed out their bars and coins and exited the market.

The mass exodus of investors from the market also resulted in most refineries and mints around the globe putting a halt to the production of palladium bars and coins. Several sectors of the economy, and not investor demand, were behind the rise in palladium prices at the time. When investors cashed out in the early 2000s, many of those bars and coins were melted down for use in other industries.

The automotive industry was a primary driver of palladium prices. Demand for palladium was high because it is a primary component in the production of catalytic converters, which are used to convert hydrocarbons emitted from automotive engines into less harmful emissions. The dental and healthcare industry also represent massive demand for palladium as it is used in the production of instruments.

As a result of the sustained demand for palladium, prices have remained high and investors have returned in search of palladium bars and coins. Although most of the major producers exited the market following the selloff, the Royal Canadian Mint and Switzerland’s PAMP Suisse refinery have slowly reintroduced palladium products to the market with success.

PAMP Suisse is the world’s leading bullion brand, and happens to be the leading producer of palladium bars at the moment. Among its most popular palladium products are the 1 oz, 10 oz, and 1 kilogram bars. Each of these bars share design features that are similar, such as primary design sets that bear the official corporate logo of PAMP Suisse, the bars weight, purity, and metal content, as well as an engraving of the assayer’s mark and an individual serial number.

Credit Suisse also produces a substantial number of palladium bars, but products from this Swiss refinery are limited to 1 oz and 10 oz weights only. In the case of both refineries, all palladium products have a minimum purity level of .9995, which makes them eligible for use in Precious Metal IRA accounts as an investment vehicle.

In the precious metal industry, palladium coins previously enjoyed a good deal of popularity. Sierra Leone introduced the world to the first palladium bullion coin in 1966, with the nation of Tonga following suit in 1967. Since that time, a number of other nations have produced palladium coins. Among those nations are Canada, the Soviet Union/Russian Federation, France, Portugal, China, and Australia.

The popular Canadian Maple Leaf coin series, introduced in gold in 1979 and silver in 1988, was expanded in 2005 to include a Palladium Canadian Maple Leaf coin. On the reverse side is the popular image of a single sugar maple leaf, surrounded by the engravings of “Canada,” the purity of the coin on either side of the design set, and the metal content and weight below. Queen Elizabeth II’s profile picture, as designed by Susanna Blunt, is featured on the obverse.

In 2010 the United States Congress authorized the United States Mint to produce the nation’s popular bullion coin, the American Eagle, in palladium. However, the program has yet to gain traction at the US Mint, remaining an idea at this point rather than a realistic product.

PAMP Suisse, the leading palladium bar producer in the world, was founded in Ticino, Switzerland in 1977. Using state-of-the-art facilities and the finest design sets available, PAMP Suisse established itself as the leading bullion brand in precious metals. Today, it is part of the Geneva-based MKS Group, a global leader in precious metal and financial services.

The Royal Canadian Mint was founded in 1907 by the Royal Mint of London to help refine and process gold and silver from the Yukon Territories. Today, it is the official mint of the Canadian government, operating facilities in both Ottawa and Winnipeg.

When you make the decision to invest in palladium products with Silver.com, you have a variety of options available to pay for your purchases. Silver.com accepts Visa and MasterCard credit/debit cards, bank wire transfer, PayPal fund transfers, and paper checks. All but paper checks are processed instantly.

Silver.com offers affordable shipping that is tiered based upon the total amount of the purchase. All orders over $3,000 qualify for free standard shipping and insurance. If you’d like to upgrade to expedited shipping, that option is available for an additional fee. All packages are shipped in discreet boxes, and delivered courtesy of the United States Postal Service or UPS.

If you have any questions for a Silver.com associate, please feel free to reach out to us at 888-989-7223. We’re also conveniently available online using our live web chat or via email.