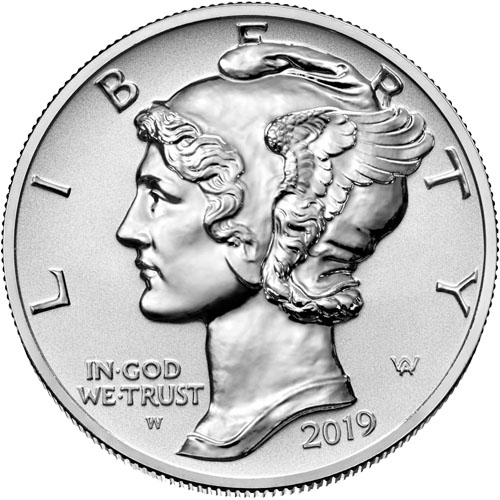 The United States Mint has taken a unique approach with its Palladium American Eagle collection. While series such as the Gold Eagle and Silver Eagle are available annually in bullion, proof, and uncirculated versions, the Palladium Eagle has been offered up in various versions over the course of its three available years. The 2017 debut was a bullion version, while the 2018 coin was a standard proof specimen. Each of those coins had a low mintage of only 15,000 coins each, while these new reverse-proof specimens have a maximum mintage double that at 30,000 coins.

All 2019-W 1 oz Palladium American Eagle Reverse Proof Coins are individually encapsulated and housed inside of gray leatherette presentation cases with a satin lining. The coins come with a Certificate of Authenticity from the United States Mint and reverse-proof visuals. This type of finish delivers mirrored design elements over frosted, matte background fields.

On the obverse of 2019 Palladium American Eagle Coins is the image of Lady Liberty created by Adolph A. Weinman in 1916. This design won an artistic competition at the US Mint and was placed on the circulation dime until 1945. It was referred to colloquially as the Mercury Dime because the Phrygian cap worn by Liberty made her appear similar to the Roman messenger god Mercury.

The reverse of 2019-W 1 oz Palladium Eagle Reverse Proof Coins includes the image of an American bald eagle on a cliff edge. The bird clutches a branch in its talons and beak while raising its wings up in the air behind it. This design is also from Weinman and featured on the 1907 American Institute of Architects gold medal.

Please feel free to reach out to Silver.com with your questions. We’re available to you at 888-989-7223, online using our live chat, and via email.