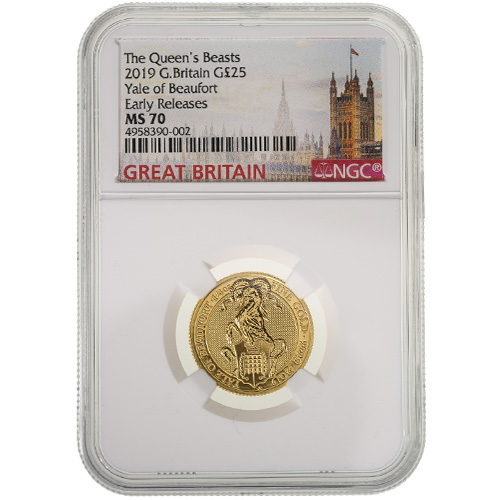 Each of the 10 heraldic beasts featured in the Queen’s Beast Series from the Royal Mint of England came to the Royal Arms from a different source. The Yale of Beaufort gold bullion coins feature the personal shield from Lady Margaret Beaufort, the mother of King Henry VII who founded the House of Tudor. Right now, 2019 1/4 oz Gold British Queen’s Beast Yale of Beaufort Coins are available to purchase online at Silver.com in perfect condition.

The included Early Release label indicates the arrival of the coin for grading. To qualify, the NGC must take possession of the coins within the first 30 days of their initial release from the Royal Mint of England.

Lady Margaret Beaufort’s second marriage to Edmund Tudor resulted in the birth of her only child, a son named Henry. This son would lay claim to the English throne during the Wars of the Roses, defeating the last King of England from the House of Plantagenet, King Richard III. Henry ruled as King Henry VII and was the founder of the House of Tudor. Lady Margaret outlived her son and contributed to the founding of two major colleges in England: Christ’s College and St. John’s College.

The reverse of 2019 1/4 oz Gold British Queen’s Beast Yale of Beaufort Coins includes the image of a Yale supporting the shield of Lady Margaret Beaufort. The Yale is a mythical beast often depicted with the body of a goat or antelope, horns on its head, and the tusks of a boar on its snout.

On the obverse of 2019 Gold British Queen’s Beast Yale of Beaufort Coins, you’ll find the right-profile portrait of Queen Elizabeth II. This is the fifth-generation image created for the Royal Mint by Jody Clark in 2015.

If you have any questions, please contact Silver.com. You can call our customer service team at 888-989-7223, chat with us live online, or email us.