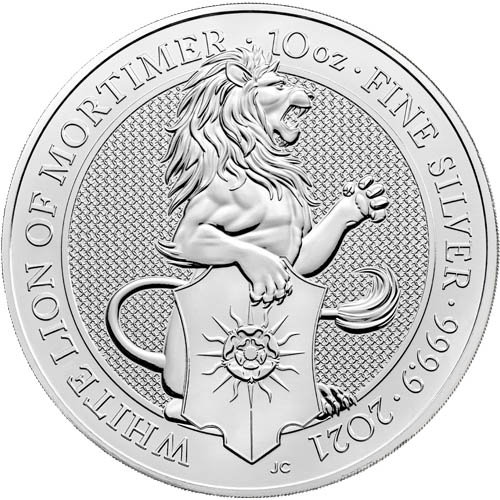 The White Lion of Mortimer is one of the few symbols from the House of York that remains in the Royal Arms of England. The House of York was a cadet branch of the House of Plantagenet in England and produced three monarchs who ruled of England for brief periods in the late 15th century. Today, 2021 10 oz Silver British Queen’s Beast White Lions are available to you online at Silver.com.

The House of York was descended on the male side from Edmund of Langley, the 1st Duke of York. He was the fourth living son of King Edward III of England. The White Lion of Mortimer, specifically, comes from Anne de Mortimer. She was an English noblewoman in the Medieval Era and was the individual responsible for the House of York’s claim to the throne of England.

All of the 2021 10 oz Silver British Queen’s Beast White Lions come with packaging that includes individuals or multiples. The individual coins ship in a capsule, with multiples of 15 coins in boxes. Each one of the coins is available in Brilliant Uncirculated condition from the mint.

On the obverse side of 2021 Silver British Queen’s Beast White Lions is Queen Elizabeth II. The longest-reigning monarch in English history, Elizabeth II is shown here in right-profile relief in a design that Jody Clark created for the Royal Mint of England in 2015. This bust of the Queen includes the George IV State Diadem Crown on her head, a piece from the Crown Jewels with 1,333 diamonds in its setting.

Please feel free to reach out to Silver.com with your questions about these silver coins for sale. You can call us at 888-989-7223, chat with us live online, or email us directly.