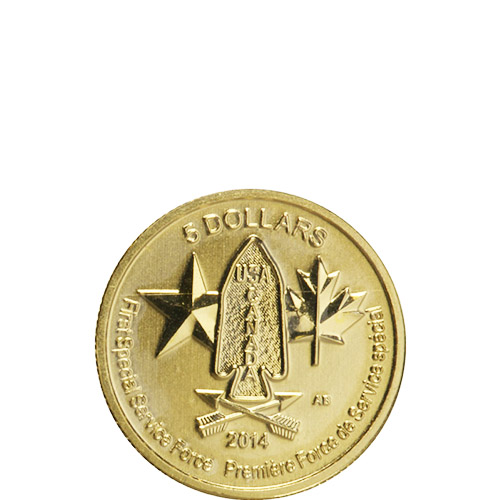 The First Special Service Force was a joint Canadian-American task force assembled in the early days of World War II specializing in stealth tactics. The men in this unit trained extensively in stealth movement and combat, hand-to-hand combat, parachuting, mountain climbing, and were also taught to work with non-standard or limited-issue weaponry. Today, the 1/10 oz Gold First Special Service Force Coin is available to you online at Silver.com.

Formed in 1942, the men of the First Special Service Force served under the command of the US Fifth Army and trained at Fort William Henry Harrison near Helena, Montana. The special skill set of these soldiers was put to good use as the force served in rugged terrain and hostile conditions around the world during World War II, including the Aleutian Islands of Alaska, Italy, and southern France.

All of the 1/10 oz Gold First Special Service Force Coins available to you here today have the second-version design available on the reverse. These gold bullion coins are offered to you in their original BU condition, with possible packaging including individual coins in protective plastic or sealed sheets of 40.

On the reverse of these 1/10 oz Gold First Special Service Force Coins is the image of the shoulder patch for the Devil’s Brigade. The arrowhead has “Canada” inscribed vertically up the middle and “USA” capping that above in a horizontal position. While the original design of these coins in 2013 used a simple US Star to the left and Canadian maple leaf to the right, this design has more ornate features. The US Star is replaced with the head of an American bald eagle, while the smaller Canadian maple leaf is replaced by a bigger, bolder version of the maple leaf.

The First Special Service Force comprised a total of 1,400 men from both Canada and America who completed the training regimen in Montana. These elite commandos served with distinction throughout the war and are viewed by most modern Special Forces units from both nations as founding fathers of their units today.

Queen Elizabeth II appears on the obverse of the 1/10 oz Gold First Special Service Force Coin in right-profile relief. Her Majesty is captured here in a fourth-generation design created for the Royal Canadian Mint in 2003 by Susanna Blunt.

Please feel free to reach out to Silver.com with any questions. You can call us at 888-989-7223, chat with us live online, or simply send us an email.